Reality. What a concept! 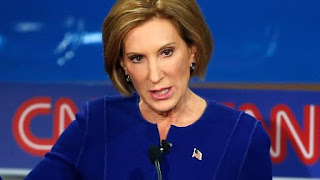 So, Carly Fiorina "won" the debate last night because she had bigger meaty clackers (or clanging brass ones; maybe that's more appropriate) than any other man on stage:

“What I would do, immediately, is begin rebuilding the Sixth Fleet, I would begin rebuilding the missile defense program in Poland, I would conduct regular, aggressive military exercises in the Baltic states. I’d probably send a few thousand more troops into Germany. Vladimir Putin would get the message. By the way, the reason it is so critically important that every one of us know General Suleimani’s name is because Russia is in Syria right now, because the head of the Quds force traveled to Russia and talked Vladimir Putin into aligning themselves with Iran and Syria to prop up Bashar al- Assad.”


All well and good, except:

The Sixth Fleet is already huge, and it's hard to say why adding to its capabilities would intimidate Putin — after all, America has enough nuclear weapons pointed at Russia to level the country thousands of times over. Her proposal for more military exercises in the Baltics seemed odd in light of the fact that President Obama is already conducting military exercises in the Baltics. And the US already has around 40,000 troops stationed in Germany, so it's hard to say what good "a few thousand" more would do. And pushing on a missile defense system in Poland is a very long-term solution to a very current problem. In total, Fiorina's laundry list of proposals sure sounded like a plan, but on inspection, it's hard to see why any of them would convince Putin to change course.

And, as Rand Paul (!) pointed out at the debate, we were talking to the USSR all through the Cold War, and now we can't talk to Putin?  What sense does that make?

And on that Planned Parenthood video she couldn't have possibly seen, she remains unbowed and unrepentant:

"No, I didn't misspeak, and I don't know who you're speaking about in terms of watching the tapes, but I have seen those images," Fiorina responded. "I don't know whether you've watched the tapes, George. Most people haven't. Certainly none of the Democrats who are still defending Planned Parenthood have watched those tapes."

Stephanopoulos then referenced a report by Vox's Sarah Kliff, who said that she watched all of the videos released and that she did not see the scene Fiorina described.

"Well, you know, there's a lot of commentary about these tapes being doctored. In fact, that's what the mainstream media keeps talking about, is the tapes and their origin," Fiorina replied. "Rest assured I have seen the images that I talked about last night. Rest assured that human lives are being aborted fully formed in order to harvest body parts."


But no, that video simply does not exist.   Which means we should start calling Ms. Fiorina a liar.

Except in American politics, that's more taboo than calling someone a racist.  Or using the "n-word."  My dears, it simply is. not. done!

By the way, Fiorina boldly told a crowd of supporters that she'd earned every wrinkle on her 60 year old face.  I have searched photos like the above in vain for signs of any wrinkles at all.  Is lying just sort of a natural condition for her?
Posted by Rmj at 4:56 PM