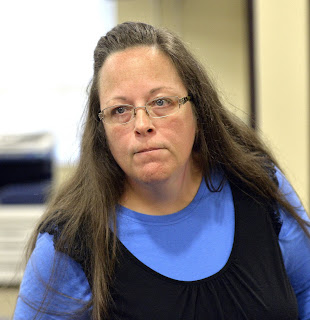 I've seen this argument already in comments at Salon:  that Kim Davis gets rich and famous now because she's a "martyr" in jail for her "sincerely held religious beliefs."

First, Kim Davis is not Sarah Palin, which is to simply say, she doesn't look anything like Tina Fey.  Sorry, but being attractive matters, especially for instant celebrity.  She resembles the mother (I know she has a name, but I never watched the show) of Honey Boo Boo, a show people watched because it was a train wreck and the characters on there were so bizarre as to be almost interesting.

Nor is she eloquent.  The report from the courtroom today had her answering briefly the questions put to her, until she spoke about her religious beliefs.  She speaks from the heart about her religious beliefs, but she sounds like people I grew up with, people as nondescript and otherwise uninteresting as Kim Davis.  Nothing against Ms. Davis personally, and I won't join in comments on her appearance or her marital history; but she's not a charismatic person who's going to excite interest for very long.  She's ordinary; she's not electrifying.  She's a symbol, which is how she's being treated by her lawyers.  But she's not an interesting person with something to say.

She's a woman who suddenly found herself on the world stage, and she seems to still be blinking in the klieg lights.  Now she's going away for what could be as long as three years.  Courts don't generally imprison people for contempt for years on end, but that's the outside number on this issue, as she doesn't come up for re-election until 2018.  I don't know the law in Kentucky, but it may be the office can't issue marriage licenses without the signature of the elected clerk, and unless there's some provision to declare her unable to complete her duties, there's nothing to keep her from blocking the issuance of marriage licenses in Rowan County until 2018.*

There are no cameras in jail, and no microphones.  More to the point, Ms. Davis hasn't sought out the cameras and microphones.  Reports are that recently she's been hiding in her office, coming out briefly to address crowds of people, and then retreating behind closed doors again.  She isn't seeking the spotlight now, and she won't command it from a jail cell.

Her lawyers and "supporters" may try to make a martyr of her, but I think they'll find they have no raw material to work with.  She isn't a particularly sympathetic character (my sympathies are with her because she reminds me of people I've known all my life.  I have no sympathy for her stubbornness that put her in jail, and I think she expected things to go differently when she started this.), and she won't become more so when she's once again locked away from public view, a public view she's never really tried to exploit.

Other people can only exploit someone for their own publicity for so long, and then they have to move on.  Ms. Davis' 15 minutes are down to about their last five.**

*There is undoubtedly some provision in KY Law that will eventually replace Ms. Davis and get the work of the county flowing again.  Or it may be pressure simply builds on her to resign because the entire county can't come to a halt while she serves her martyrdom in jail.

**The problem with commenting on a "breaking" story is that you never have all the information at one time.  Now it seems the deputy clerks, save Davis' son, have promised to issue marriage licenses, so the work of the county clerk's office will go on without Ms. Davis.  She won't be released from jail immediately, but I also wonder if the Judge will soon release her with instructions that if she blocks the issuance of licenses again, she's back in jail instanter.

Of course, if she's not in jail for long, and if the licenses flow, then whither her martyrdom?  Or even if she is there for long, it will be only her stubbornness that keeps her there.  She won't stop the marriages from happening.