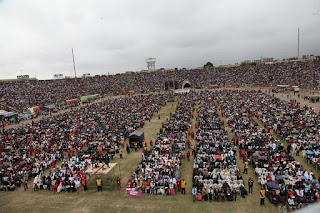 They don't know Kim Davis either.

So, first Kim Davis (through her lawyers) said that 100,000 people in Peru rallied together to pray for her.

Then they said:  well, no, that didn't happen.

Now they say Kim Davis met with the Pope in D.C., and he told her to "stay strong."

Given the source of this story is the same source that said a photo of an event in 2014 was an event in September of 2015 too, also, as well; yeah, let's just wait for the retraction.

Not that any of this has anything to do with what is happening in the Sixth Circuit or in the Federal District Court, or will have any effect on enforcement of Obergefell.

UPDATE:  It turns out that retraction isn't coming because the Vatican has tacitly confirmed the meeting. The article points out that Ms. Davis' parents are Catholics, which shifts my presumption that she would be anti-Papist in favor of her being more tolerant of Catholics than I presumed.

Such is the danger of presumptions, and why I should not make them.

This news has, predictably, upset commenters around the web because the good guys are never supposed to meet with the bad guys  However, the Pope's ideas about same-sex marriage are well known, and it doesn't surprise me that the Vatican would, as the NYT reports, wish to meet with Ms. Davis.

It also doesn't affect her legal case very much, nor my opinion that she isn't engaged in conscientious objection.  Thoreau, after all, and Gandhi and his followers, as did King and his followers, protested unjust laws by going to prison as part of their protest.  Ma. Davis wants the law to change to suit her; she doesn't want it to change to seek justice.

Besides, meeting with Pope Francis doesn't change the course of her legal case.  Indeed, the fact that there is a legal case is probably why the Vatican won't confirm this meeting.  They don't want to be seen as trying to influence the judicial system.

And it confirms that the Pope is not the fictional character of our personal preferences.  I can appreciate that he would want to meet with a figure like Kim Davis.  I also appreciate the unusual step of not confirming the meeting, so he doesn't seem to be trying to influence the legal process.  He has been careful to distinguish his doctrinal positions from what should be the law of the land in any land, and I appreciate that kind of diplomacy.

UPDATE THE SECOND:  Not so fast.  Yes, the Pope met with Kim Davis.  But it was in a roomful of other people, and not a personal audience requested by the Vatican, as the NYT article implies (ain't news in the internet era grand?).  Well, you'll just have to read Fr. Martin's article about what the visit with Kim Davis means.  There may be a lot less here than meets the eye.  Of particular note:

It’s hard to know how much the Pope Francis knew about each individual who was introduced to him during his long trip to the United States. Did he know much about Kim Davis before meeting her? Was he following her case before he entered the country? Did he learn about the controversy from a local bishop after he arrived? Or was her story quickly relayed to him in a receiving line? And how was it explained to him? “Holy Father, this is Kim Davis who…”

And to that "support" the Pope supposedly gave to her cause:

Listen to the pope’s own words on the matter, which came in response to ABC’s Terry Moran’s question during the in-flight media conference back to Rome, about individual conscientious objection.

In fact, now that we know that he met Ms. Davis, that first sentence indicates he is not in fact talking about her case in particular.

You know, the less you take for granted from news reports, especially about the words and actions of Jesuit Popes, the better.