Enough about you, let's talk about me for a minute.... 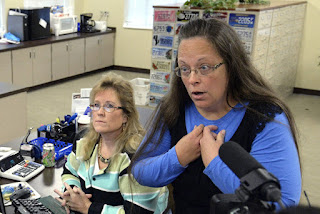 (This is just because I wrote it the other day and never got around to publishing it.)

Davis later insisted that “it’s never been a gay or lesbian issue for me” — even though gays and lesbians were the only ones she was actively discriminating against — “it has been about upholding the word of God and how God defined marriage from the very beginning of time.”

Then you should be issuing marriage licenses to men who want to marry several women at the same time, despite bigamy laws.  After all, that's how "God defined marriage" from "the very beginning of time."

Or at one point in time, anyway.

And this is where Kim Davis proves her legal counsel (who has already said following the Rules of Procedure of the Sixth Circuit is a "formality."  Which is a way of trying to excuse the fact they got slapped down by the Sixth Circuit for not following those rules) is giving her very bad legal advice:

“If I resign I lose my voice,” Davis replied. “Why should I have to quit a job that I love and that I’m good at? I’ve been a county employee and served the public well for over 26 years before I got elected. It comes back to, they can accommodate for all sorts of issues, and we ask for one simple accommodation and we cannot receive it.”

There are actions that government employees must carry out by virtue of holding public office.  Such actions are defined as "ministerial" by the courts, a term that gives the courts authority to order such officeholders to comply with the requirements of the office and carry out said duties.  It seems clear by now that issuing marriage licenses in Kentucky by the county clerk is such a duty.  If the parties present the qualifications for the license, it must issue, whether the clerk approves of the marriage or not (maybe she knows the family and doesn't approve of the match; maybe she still doesn't like mixed race marriages).

Kim Davis calls her refusal to do her ministerial duty an "accommodation" she is entitled to.  Please note she has lost that argument every time she has gone to court.

She can have her "voice."  What she can't have is the freedom to choose which ministerial duties she will carry out, and which ones she won't.  And all the interviews in the world won't change that.
Posted by Rmj at 5:00 PM