All's set at six and sevens 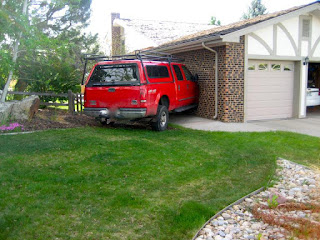 Not even close to being my house or the pickup in question,
but it is amazing what you can find on the internet.

There is something oddly disruptive about having your house rammed at 10 o'clock at night by a pickup truck.

Fortunately it hit directly on the corner of the house, so the impact was spread through the brick facade.  A direct hit would probably have placed the front end in the bedroom that was struck.  As it is, the damage is all to the brick (extensively) and to the sheetrock (cracked across the ceiling and on two walls).

The room will have to be gutted to the studs and started over (although the floor is fine), and the windows replaced; but it's been needing a makeover since we moved in.  Now we have no excuses left to not do it.

But it sure is weird to hear a loud thump (it never sounds a tinny as it does in the movies; it's a much more bass thud than a tenor crackle) and go outside to find a pick up rammed into your home.