It's raining down in Texas.... 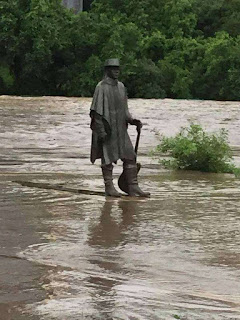 I don't disagree with this article, but I have to quibble:

This is at least the fourth major flood in the Houston area in just the past 12 months, with previous flooding events last May, June, and October pummeling Texas hard. The triangle between Dallas, Houston, and San Antonio is sometimes referred to as “flash flood alley” because of its dangerous mix of hilly terrain, sprawling urbanization, and frequent heavy downpours, adding to the region’s already considerable vulnerability to climate change.

That area is known as "Flash flood alley" largely because that triangle describes the three largest metropolitan areas in Texas, and because all three sit on very, very flat ground (who really cares about a flash flood in a low density rural area?).  Dallas and San Antonio sit primarily on the flood plains of rivers (San Antonio's river famously runs through the downtown).   I was driving in San Antonio once in a rain storm, and water seemed bubble up out of the ground and form deep puddles on the roadway.  "Killer puddles," because my car got splashed by oncoming traffic in a manner I've never experienced before.  It was like driving in a dry creek bed during a flash flood.  The water simply didn't drain at all; it stayed where it fell.

Dallas is not notoriously hillier than San Antonio, and Houston is all coastal plain (which extends from the coastline inland to Austin.  It's called "The Hill Country" because the terrain changes rather suddenly to hills from plain).  The areas flooded in Houston just now lie along bayous or creeks which are overrunning their banks.  Most water courses have flood plains, and Houston exists along several of them.  We've got sprawling urbanization and ever more frequent heavy downpours.  But the highest elevation in Houston is the freeway overpass near my house, that towers about 10 stories in the air.

Seriously.  It's practically a scenic overlook in the county.

The "hilly terrain" is all in West Austin and beyond.  Austin itself floods because of hilly terrain and Shoal Creek (been there, done that).  The rest of the area floods because the water on a table top has nowhere to go but everywhere at once.

So yeah, when it rains down here, it freakin' floods.  And it's been raining much harder, and longer, than usual.  If this becomes usual (and it probably will), we're gonna have problems.