Americans are afraid of the poor 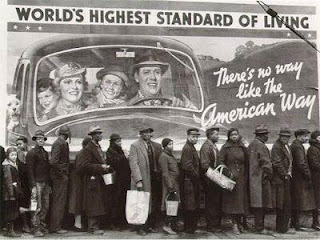 And this is why (courtesy of Southern Beale):


In eastern Kentucky and other former Democratic bastions that have swung Republican in the past several decades, the people who most rely on the safety-net programs secured by Democrats are, by and large, not voting against their own interests by electing Republicans. Rather, they are not voting, period. They have, as voting data, surveys and my own reporting suggest, become profoundly disconnected from the political process.

The people in these communities who are voting Republican in larger proportions are those who are a notch or two up the economic ladder — the sheriff’s deputy, the teacher, the highway worker, the motel clerk, the gas station owner and the coal miner. And their growing allegiance to the Republicans is, in part, a reaction against what they perceive, among those below them on the economic ladder, as a growing dependency on the safety net, the most visible manifestation of downward mobility in their declining towns.

They don't want it to rub off.  That and fear of failure, which is a powerful fear indeed.  Especially in America, where it can ruin you.

And it isn't just that poor people don't vote, but that they don't always vote the way you would want them to.  We would do well to mind the admonition of Dorothy Day:


We are sure they would think as we would have them think, and that they would be wrong not to.  Judgment is the first compensation we allow ourselves, and the first we should renounce.
Posted by Rmj at 3:55 PM