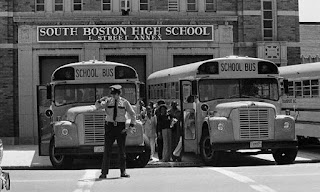 As I've said before, Brown v. Board is now more honored in the breach than in the keeping.  The ruling stands as almost a bedrock principle of Constitutional law and of social justice.

But that's all it stands for.

Two interesting points in this interview, both related to Bernie Sanders dismissal of "the South" (and the same dismissal made by so many of his supporters):

1)  that "bussing" was only "bussing" when it applied to white students, and 2) that racism was a problem in the South, not in the North.

Most of these Northern white liberal politicians were reflecting what they understood as the sentiments of their constituents. For them, they thought of civil rights and integration as being a Southern story. They took seriously the idea that these Northern schools just couldn’t be intentionally segregated. Therefore, when they started hearing about these schools from their constituents, hearing that language of neighborhood schools and protecting the homeowners’ rights, that really resonated with them.

It was a fault lime for a lot of these liberal politicians. It was safer to condemn school segregation in Little Rock, much less so to condemn that in Chicago or New York when you knew your white constituents were going to be furious at you when you came home. They didn’t have the same sense of moral urgency when it was in their own backyard.

There is no justification for Jim Crow laws, but those laws arose in the South because of Reconstruction.  The South felt compelled to make explicit what the North allowed itself to continue to practice implicitly.  Both, of course, were wrong.  As Matt Delmont goes on to point out:

The way racism functioned in the North was much subtler. In the South it’s easy to picture how racism operated—colored drinking fountains and white drinking fountains. The system of Jim Crow segregation was so visible. It was still incredibly difficult to overturn that system, but it was easier to visualize. For Northern white citizens and white politicians, the way their schools and neighborhoods were structured was just normal, they didn’t know or chose not to understand that it wasn’t just a matter of white families choosing to live in white neighborhoods and black families in black neighborhoods. There was a whole history of mortgage redlining, zoning decisions, public housing discrimination, and real estate discrimination that created those separate neighborhoods. But the subtlety of that allowed white people to just see it as common sense, just how our neighborhood and schools should be.

But there wasn't a person in the South, before or after Brown v. Board began to be implemented (which took into the '70's in my hometown), or the '64 Civil Rights Act, who didn't think the Jim Crow laws were just "common sense, just how our neighborhoods and schools should be."  When bussing finally reached my hometown in 1971, the black schools were closed, and the students brought, by car or bus, to the white schools.  Which, according to the top comment at that Slate interview, is how it should be:

No one wants to pay property taxes out the yin yang only to have their own kid bussed to an inferior school across town while some poor kid gets bussed to the good school you're paying for.

If they'd done one way bussing (i.e. just busing black kids to the white schools) the program would have been far more politically palatable, but no one is going to be willing to sacrifice their own kid on the mantle of social justice, even if it’s a moral imperative on the societal level.

Bussing black kids is fine, maybe even appropriate; but bussing white kids?  Now you've gone to meddlin'.  "No one" in that first sentence, now means no white person; and why should they pay taxes for their kid to go to an "inferior school across town"?  Amirite?

This is part of the reason Hillary Clinton is popular among Democratic primary voters in the South.  She's seen as one of us.  She doesn't dismiss "the South" the way Northerners do, as if they were superior to us.  That, and her work is seen as being in service to others.  I know he's resonating now, but the more I see of Bernie Sanders, the more I see a man dedicated to an idea, not to people.  He thinks the idea will be our salvation.