Medieval Theology is looking better all the time 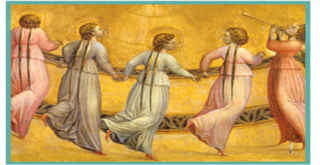 Remember that whole thing about medieval theologians arguing over how many angels could dance on the head of a pin?  Yeah; we're back there again, thanks to Hobby Lobby.

Not the store; the Supreme Court decision:

This week, the Little Sisters of the Poor told the Supreme Court that they arefinally willing to let the government accommodate their religious beliefs. In a case argued last month, Zubik v. Burwell, the order of nuns challenged the government’s efforts to work around their religious objections to paying for health insurance that covers contraception. The government had offered an accommodation, relieving them of any responsibility to provide contraception—it only asked that they notify either the federal health agency or their insurer of their religious objection. But the Little Sisters complained that by giving any kind of written notice, they would be triggering contraceptive coverage for their employees, who staff their nursing homes for impoverished seniors. They also objected that the government would make them complicit by “hijacking” their health plans to provide such coverage, even if there was no actual cost to the religious employer.

Now the Little Sisters are telling the Supreme Court that as long as they don’t have to communicate their objection in this way, their consciences are clear. And they are joined in this turnabout by the numerous other religious nonprofits participating in the litigation.

This actually presents, as the Slate article points out, problems for the Supreme Court in how to cast their opinion if they accept this acquiescence.  And I freely admit that perhaps I'm tired and perhaps I'm distracted and certainly I'm not really trying to follow the absolutely rococo reasoning that is the argument of the Little Sisters of the Poor on this issue.  I'm more commonly a fan of "formalism" than most, but even I discard their argument as excessive formalism.  I'm sure I should care more and follow the reasoning right down to the ground, but I just don't and I just won't.

This is all the upshot of Hobby Lobby v. Burwell, and is exacerbated by an even numbered bench, a problem that would be there whether the Senate was being intransigent or not.  It seems to me the Court now has to decide whether this actually is NOT a burden on the religious freedom of the Little Sisters of the Poor, et al., simply because they say so.  Which is a fairly absurd standard for the law, frankly.  We don't usually leave that determination to the parties; we usually assign it over to a reasonably prudent person, so we are fair in our legal system to more than the two parties before the dock.

Oh well, as I say, I have a lot of other things on my mind, and this one is the fault of no one but the 8 justices in Washington.  Let them puzzle over it.  And then maybe they can set that number of angels for us; as a matter of law.
Posted by Rmj at 4:22 PM