In the news this morning.... 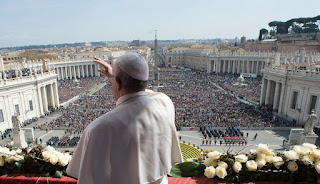 What I'm hearing about what the Pope has announced today seems to boil down to this:

Well, he is still the head of the Church.  If he wasn't, his words wouldn't have the weight they do.  Since he is, his words are weighted down by the office he holds.

Thus do responsibility and authority balance the scales.

His exhortation includes this admonition:

I understand those who prefer a more rigorous pastoral care which leaves no room for confusion. But I sincerely believe that Jesus wants a Church, attentive to the goodness which the Holy Spirit sows in the midst of human weakness.

Update:  I really need to read this document, because now I'm being told the Pope said "no one can be condemned forever," a statement which has seriously far-ranging implications, even as it sounds like just a nice, benign sentiment about forgiveness.

Then again, forgiveness is the most radical thing of all.  Taken as a bland aphorism, it's almost meaningless; taken as a theological statement, it opens the gates of Hell.