Not with a bang, but a whinging 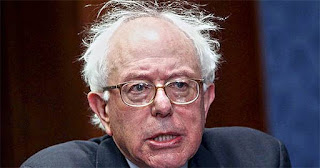 I keep thinking Sanders is a victim of his most zealous on-line supporters.

I keep being wrong:

Well, here’s what I think,” Sanders replied. “I think at the end of the day, what Democrats all over this country want to make sure is that somebody like a Donald Trump or a Ted Cruz does not end up in the White House. And I think what more and more Democrats are seeing is that Bernie Sanders is the stronger candidate.”

“Well, she is getting more votes. A lot of that came from the South,” Sanders parried. “But if you look at the polling out there, we do a lot better against Trump and the other Republicans in almost every instance — not every one — than she does. And the reason is that we both get a lot of Democrats, but I get a lot more independents than she does.”


Two things:  if the argument is the South is all red states, then:

Likewise, Wyoming, Utah, Alaska, Idaho and Oklahoma, each of which were Bernie victories, are red states that probably won’t go Democratic in November.


And the other is:  a Vermont by way of Brooklyn Yankee saying, essentially:  "F*ck the South!"?  Yeah, that's the way to run a national campaign.   One could go further, and point out that without the delegates from "the South" that Bernie did win, he wouldn't still be in this race at all.

This is how a campaign self-destructs.