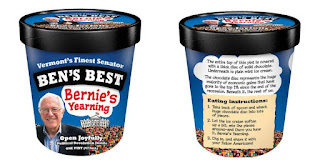 Because whoever said revolutions were democratic, amirite?

Here's the thing about delegates to a political convention:  they aren't representatives of the voters who voted in the primaries and caucuses.  They are pledged to a candidate through the first ballot and, after that, they can vote for Mortimer Snerd if they want to.  So the most "undemocratic" thing any candidate can do, is to wish for a brokered, er, contested....no, I'm sorry, the newly preferred adjective is "open"....convention.

The campaign manager for Sen. Sanders (I-VT) argued in a Tuesday interview on CNN’s “New Day” that there was a path for his candidate to secure the Democratic nomination during the party’s July convention in Philadelphia.

"I think what this campaign is looking for and what the senator is looking for is going into the convention and coming out with the nomination," Jeff Weaver told host Chris Cuomo.

“When we arrive at the convention, it will be an open convention, likely with neither candidate having a majority of pledged delegates," Weaver added.

I'm old enough to remember when Democratic super delegates were the great evil and scourge of the party because they are not elected by any voters to serve as delegates, and therefore are "undemocratic."  But apparently ignoring the will of the majority of the voters (because, according to some Sanders supporters, the primaries are "front-loaded" with "conservative" states, which is somehow a conspiracy against The Berne) who have voted, and finally all the voters who are going to vote, we should go into an "open" (sounds so much less GOP than "brokered," which is what THEY are going have!) convention and elect Bernie because democracy works best when the fewest people get to make the decision.

And the fewest people, in this case, would be the delegates.

I do understand them's the rules, and that's how the game is played, and what's sauce for the GOP goose may well be sauce for the Democratic gander, too.  But to decry the process so far, including the pledging of "super delegates" to one candidate or the other, as "undemocratic," and then to tell Stephen Colbert:

“We have won six of the last seven caucuses, most of them by landslide victories,” Sanders reminded Colbert. “And I think superdelegates should listen to the will of their people.”

“I think what we need in the Democratic Party is some democracy,” he continued. “I would hope that superdelegates take a look at who the strongest Democratic candidate is. And, you know what, that’s me.”

Although how a bunch of non-representative people in a large building are the model for democracy is one I haven't had explained to me yet.....