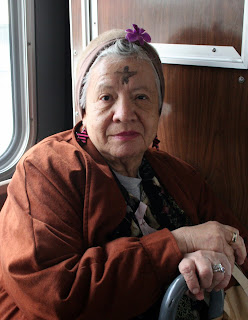 "Now my life is in turmoil, but should I say, 'Father, rescue me from this moment'?  No, it was to face this moment that I came.  Father, glorify your name!"  Then a voice spoke out of the sky, "I've glorified it and I'll glorify it further."

The crowd there heard this, and some people remarked that it had thundered, others that an angel had spoken to him.--John 12: 27-29, SV.

When I entered seminary, it wasn't long before I realized this was what I was being taught about scriptures and interpretation was what I'd been looking for all my life; and shortly after that revelation, I knew it was what people in the pews were waiting for, too.  My seminary professors, wiser than us in the ways of the pulpit, warned us against such hubris and self-regard.  Alas, most of us had to learn the hard way that the world wasn't just waiting for the right interpretation of the Gospel to finally come along before getting on with making the empire of God on earth.

Elias Isquith points out that Sen. Sanders doesn't seem to have learned that lesson yet:

I think if we had a media in this country that was really prepared to look at what the Republicans actually stood for rather than quoting every absurd remark of Donald Trump, talking about Republican Party, talking about hundreds of billions of dollars in tax breaks for the top two tenths of 1 percent, cuts to Social Security and Medicare, Medicaid, a party which with few exceptions doesn’t even acknowledge the reality of climate change, let alone do anything about it, a party which is not prepared to stand with women in the fight for pay equity, a party that is not prepared to do anything about a broken criminal justice system or a corrupt campaign finance system, I think, to be honest with you—and I just don’t, you know, say this rhetorically, this is a fringe party. It is a fringe party. Maybe they get 5, 10 percent of the vote.


Shorter Bernie:  if everybody just knew what I know, they'd all think like me.  Except for 5-10% because nobody's perfect.

It's the kind of reasoning I see on the internet all the time.  In fact, the comments at Isquith's article are a case in point:  the Sanders supporters don't even take on the substance of what Isquith says:  they attack Clinton, Clinton's supporters, and defend Sanders for being right about, well, everything.  One even blames the media for racism.*  The problem is all these people who don't think like "we" do, because of the media or whatever!  It's mind control, man!  MIND CONTROL!!!!

As Paul Simon said:  "A man hears what he wants to hear, and disregards the rest." Or, as Isquith says, would that it were so simple:

People are a lot more complicated than Sanders gives them credit for, here; and they’re also less easily duped.  Your stump speech is good — there’s a reason you so doggedly stick to it. What it isn’t, however, is absolute truth. That isn’t to say that Sanders is wrong to believe that the media influences voters’ behavior, or that the cult of “objectivity” can lead the media to engage in false equivalence. He’s right on both.

But to the degree he’s imagining? To the extent that one of the two major parties — which millions of Americans believe in — will essentially disappear? That’s not just a stretch. That is absurd. “Sanders,” as Murphy writes, “seems to miss a far more obvious takeaway. People vote for Republicans not because they’ve been brainwashed, but because they actually like what Republicans like Trump are proposing.”


But many of the responses to his article don't want to see it that way, and so they don't.  Period.  To them what that final quote can't possibly be true, so they dismiss it entirely, proving either they are brainwashed, or they actually like what Sen. Sanders is saying.  But they can't imagine anyone else disagreeing with them and having a reason to do so.  Which must mean the "other" is corrupt, or venal, or stupid.

As my Pastoral Care teacher loved to say:  "Life is messy."  That's a harder lesson to learn, however, than the simple phrase makes it seem.  Life is messy because people aren't like you; and they aren't much like other people, either.

Just ask Jesus, and all those people who were with him, according to the Gospel of John.  That time, nobody in the crowd got it right.  It's not even clear they heard what was said.


bluecollarpeep
The power of the media is impossible to comprehend.
Where would racism be if the media did not identify anyone by their skin color?
Could the media trigger a skin-color-neutral reality?

So the media is God; or the Devil.  Two conditions which often appear alike, I guess.