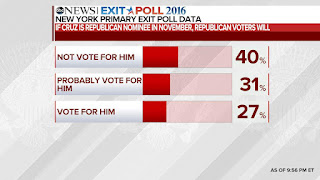 It probably won't come to this, but when I said Bernie did himself no favors dismissing the South as a voting bloc, the results in New York State tonight in the GOP primary are a prime reason why I said that.

Cruz was talking like what he thought a native Texan sounds like when he disparaged "New York values."  It was stupid, offensive, and inexcusable.  And he forgot, despite what the New York Times said about him today, that New York was listening.

Boy, were they listening.

It really doesn't pay to insult people, and then ask them to vote for you.