Buying a new basket for my eggs 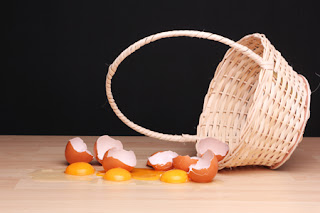 But to put that in perspective, Texas is closer than Pennsylvania right now (where Clinton leads by 7 to 8 points). And Clinton is more likely to win Texas than Trump is to win the election, at least according to the polls-only model, which puts Trump’s overall chances at 12 percent.--Nate Silver


I've heard news reports that San Antonio (Bexar County) is running out of registration forms, and is planning for a higher turnout of voters because of increased registration.  San Antonio is a conservative city, due to all the military bases (and being in Texas), but all the major metro areas of Texas went for Obama in both 2008 and 2012.

Taco trucks gained national notoriety for registering voters in Houston.  And the polls have been showing Clinton either ahead of Trump, or tied (the last poll I say had Trump ahead by four points, which was the margin of error for the poll).

Now Nate Silver is paying attention; which is interesting because Texas has been a one-party state since Reconstruction, and even a massive influx of non-"native Texans" that has made the state the second most populous in the country (with the third largest city in the country), hasn't changed that.  Texas flipped from solidly Democratic to solidly Republican simply by staying solidly arch-conservative (odd, actually, because the Texas Constitution was a populist document aimed at hobbling banks and the railroads, the two symbols of runaway capitalism in the 19th century.  Sadly we didn't have Hamilton & Co. at our constitutional convention, so that populism didn't last long/  Well, that and we discovered oil, and decided Big Money wasn't so bad after all.  Money talks.).  But Trump may just upend all of that.

Then again, maybe not; and even if he does, I don't think it would be a permanent change.  It would however, be a solid refutation of Trump (and of the vile Lt. Gov., who is Trump's point man for GOTV in Texas).

That alone would be worth it.

The first indication we'll have is of what happens next week, when early voting starts.  Then again, heavy turnout for early voting usually just means people are ready to vote; it seldom presages a heavy turn out on election day.  And, as ever, it will take massive turnout in the cities to outweigh the turnout of the true believer Republicans in the countryside.  I'm still not putting my eggs in that basket.

One can live in hope, though.