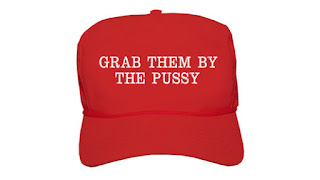 Since the revelation that Donald Trump is, indeed, a crude man-child who, well into his 6th decade was still talking like a 13 year old boy, a dividing line has been exposed by the shifting tectonic plates.  One one side (actually before the tape was released ) were "100 evangelical leaders":

“Imperfect elections and flawed candidates often make for complicated and difficult choices for Christians,” the letter reads. “But sometimes historic moments arise when more is at stake than partisan politics ― when the meaning and integrity of our faith hangs in the balance. This is one of those moments.”
...
“Because we believe that racial bigotry has been a cornerstone of this campaign, it is a foundational matter of the gospel for us in this election, and not just another issue,” they wrote. “This is not just a social problem, but a fundamental wrong. Racism is America’s original sin. Its brazen use to win elections threatens to reverse real progress on racial equity and set America back.”

Counterpoint to those 100 leaders and 5000+ signatures, are the statements of Ralph Reed and Tony Perkins:

“People of faith are voting on issues like who will protect unborn life, defund Planned Parenthood, defend religious liberty and oppose the Iran nuclear deal,” Ralph Reed, the leader of the Faith and Freedom Coalition told the Daily Beast. “A ten-year-old tape of a private conversation with a talk show host ranks low on their hierarchy of concerns.”
...
“My personal support for Donald Trump has never been based upon shared values, it is based upon shared concerns about issues such as: justices on the Supreme Court that ignore the constitution, America’s continued vulnerability to Islamic terrorists and the systematic attack on religious liberty that we’ve seen in the last 7 1/2 years,” Perkins told Buzzfeed in an e-mail.

Of Mr. Reed as an "evangelical leader," let the record reflect:

To recap, Ralph Reed worked for team Abramoff by mobilizing Christians opposed to gambling to shutter casinos. The only hitch: Reed was usually paid by other casinos who had a financial interest in eliminating their competitors. Therefore, Abramoff needed to find a way to make Reed comfortable, and to protect him against critics and the likely fury of his own Christian followers--who might have been upset if they had discovered that Reed was being paid by gamblers to do their bidding. The solution: Abramoff laundered the Indian casino payoffs to Reed by routing them through other organizations, including Grover Norquist's Americans for Tax Reform and a phony "think tank" in Rehoboth Beach, MD, run by a life guard and a yoga instructor who were friends of Abramoff's pal, Mike Scanlon.

Let's be clear: there was probably nothing illegal about what Reed did. But, he was engaged in a kind of spiritual fraud: telling his supporters that he was opposed to gambling when, in fact, gambling was making him rich.

Notice there is no statement from Mr. Reed or Mr. Perkins about "sin," or racism, which is truly "America's original sin."  No statement about social problems, unless you consider abortion a social problem; not even a mention of the gospel.  No, their statements are about political power: about American foreign policy vis a vis Iran's nuclear program; about "religious liberty," which they define as the liberty to mistreat same sex couples and homosexuals in general (which is still, despite Obergefell, legal to do); about abortion (without which they wouldn't have something to persistently rail against, so that dog never wants to catch that car), and Planned Parenthood (just because).

Mr. Reed and Mr. Perkins are about chasing shibboleths, the better to aggrandize power to themselves.  Take away those phantoms, and what are they good for?  "Evangelical leaders"?  In their minds, only.  And interesting they are so much in the minority on this issue of supporting Trump, and so steadfastly attached to him even when it is clear he is no "Sunday school teacher."  Who cares?  It's not about morality for them; it's all about power.