The Classics Never Get Old 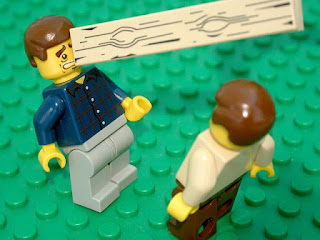 It's not like this is the first time I've noticed this, but then again, did I mention these "evangelicals leaders" were not pastors leading congregations?

Jerry Falwell, Jr. bears the name of his famous father, but so far as I can discern makes no pretense to being a pastor.  He's a licensed lawyer and the President of Liberty University, but apparently has no official connection to the church his father pastored until his death.

Tony Perkins is the President of the Family Research Council.  He holds a B.S. from Liberty University, and his career includes being a police officer.  I mention this only because his biography shows no indication he has ever pastored a church.

Of Ralph Reed perhaps the less said, the better, if only because of the dictum that if you can't say anything nice about somebody....(not that this usually stops me, though more often it should). He considers himself a born-again Christian, but his activities have never included pastoring a church.

James MacDonald, on the other hand, is the pastor of a church:

Mr. Trump’s comments released yesterday—though 10 years ago (he was 60)—are not just sophomoric or locker room banter.  They are truly the kind of misogynistic trash that reveals a man to be lecherous and worthless—not the guy who gets politely ignored, but the guy who gets a punch in the head from worthy men who hear him talk that way about women.

I would not admonish "worthy men" to punch Mr. Trump in the head, but neither does Rev. MacDonald excuse Mr. Trump's statements.  Perhaps the difference is that Rev. MacDonald is a pastor of a church, and would answer to his congregation for being on Mr. Trump's Evangelical Council, in light of Mr. Trump's revealed remarks.  Maybe Mr. Falwell could stand to learn that lesson, too:

Liberty United Against Trump
In the months since Jerry Falwell Jr. endorsed him, Donald Trump has been inexorably associated with Liberty University. We are Liberty students who are disappointed with President Falwell’s endorsement and are tired of being associated with one of the worst presidential candidates in American history. Donald Trump does not represent our values and we want nothing to do with him.

A majority of Liberty students, faculty, and staff feel as we do. Donald Trump received a pitiful 90 votes from Liberty students in Virginia’s primary election, a colossal rejection of his campaign. Nevertheless, President Falwell eagerly uses his national platform to advocate for Donald Trump. While he occasionally clarifies that supporting Trump is not the official position of Liberty University, he knows it is his title of president of the largest Christian university in the world that gives him political credentials.

Associating any politician with Christianity is damaging to the Gospel of Jesus Christ. But Donald Trump is not just any politician. He has made his name by maligning others and bragging about his sins. Not only is Donald Trump a bad candidate for president, he is actively promoting the very things that we as Christians ought to oppose.

A recently uncovered tape revealed his comments bragging about sexually assaulting women. Any faculty or staff member at Liberty would be terminated for such comments, and yet when Donald Trump makes them, President Falwell rushes eagerly to his defense – taking the name “Liberty University” with him. “We’re all sinners,” Falwell told the media, as if sexual assault is a shoulder-shrugging issue rather than an atrocity which plagues college campuses across America, including our own.

It is not enough to criticize these kinds of comments. We must make clear to the world that while everyone is a sinner and everyone can be forgiven, a man who constantly and proudly speaks evil does not deserve our support for the nation’s highest office.

Jesus tells a story in the Bible about a man who tries to remove a speck of dust from his brother’s eye, while he has a log stuck in his own. “You hypocrite,” Jesus says, “first take the log out of your own eye, and then you will see clearly to take the speck out of your brother’s eye.”

We Liberty students are often told to support Donald Trump because the other leading candidate is a bad option. Perhaps this is true. But the only candidate who is directly associated with Liberty University is Donald Trump.

Because our president has led the world to believe that Liberty University supports Donald Trump, we students must take it upon ourselves to make clear that Donald Trump is absolutely opposed to what we believe, and does not have our support.

We are not proclaiming our opposition to Donald Trump out of bitterness, but out of a desire to regain the integrity of our school. While our president Jerry Falwell Jr. tours the country championing the log in his eye, we want the world to know how many students oppose him. We don’t want to champion Donald Trump; we want only to be champions for Christ.

And see if you can catch the contradiction in Mr. Falwell's response:

“I am proud of these few students for speaking their minds but I’m afraid the statement is incoherent and false,” Falwell wrote. “I am not ‘touring the country’ or associating Liberty University with any candidate. I am only fulfilling my obligation as a citizen to ‘render unto Caesar the things that are Caesar’s’ by expressing my personal opinion about who I believe is best suited to lead our nation in a time of crisis. This student statement seems to ignore the teachings of Jesus not to judge others but they are young and still learning.”


Apparently only youth cannot judge, but Mr. Falwell is free to judge Trump and Clinton, and to find the latter wanting.  Jesus also spoke about the splinter in your brother's eye, the log in your own (as the students note).  Maybe Mr. Falwell needs to read up on Jesus' teachings about humility, and turning the other cheek.   Then again, for Mr. Falwell, the primary consideration is power:

"Donald Trump of five, ten years ago, even two or three years ago may have been a different person," Falwell Jr. said. "The bigger point is he is going to appoint the right justices to the Supreme Court. He's going to control immigration. He's going to bring our country back to a position of strength again. And that is why I'm supporting Donald Trump."

And don't think the students don't know that:  "he knows it is his title of president of the largest Christian university in the world that gives him political credentials."  Besides, the student who drafted the statement reports over 250 students, faculty, and alumni have signed it.  Mr. Falwell needs to check his assumptions again.  It isn't all that clear, after all, who he is leading.

"Leading evangelicals" is a media term for "people we have heard of who claim a large following, usually based on books sales or some level of fame only slightly more earned than Kim Kardashian." It is not a term for people who truly have leadership responsibilities. (When was the last time you heard the Pope, or any Catholic priest for that matter, described as a "leading Catholic"?)  It's even more interesting when they act like they do, and find out those responsibilities are more limiting than they imagined.