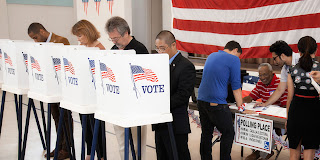 This is actually very interesting, long before you get here:

Trump has recently started encouraging his mostly white supporters to sign up online to be “election observers” to stop “Crooked Hillary from rigging this election.” He’s urging them to act as posses of poll watchers in “other” communities to ensure that things are “on the up and up.”

“Watch your polling booths,” he warned.

His supporters are heeding the call. “Trump said to watch your precincts. I’m going to go, for sure,” said Steve Webb, a 61-year-old carpenter from Fairfield, Ohio.

“I’ll look for . . . well, it’s called racial profiling. Mexicans. Syrians. People who can’t speak American,” he said. “I’m going to go right up behind them. I’ll do everything legally. I want to see if they are accountable. I’m not going to do anything illegal. I’m going to make them a little bit nervous.”

Which is, actually, an illegal activity; but we'll get back to that.  The interesting bit is here:

“How do you proclaim fraud before the incident takes place? It’s like my calling you a robber before you rob the bank,” said Al Cardenas, who was chairman of the Republican Party of Florida during the 2000 electoral recount. “In America, you call out a crime or malfeasance after it happens.”

Cardenas, having been immersed in the Florida recount for 37 days, said an average of 1.5 percent of votes cast in the nation are not recorded, due mostly to technical issues and procedural errors.

“That’s a significant number in a close election, but they are not wrongdoings,” Cardenas said. “Americans should feel that the ultimate outcome of the election is fair. That’s how we defend our democracy.”

Cardenas said he would not vote for Trump or Clinton — even if that means Clinton wins. “Hey, the radicals had their day,’’ he said. “This is the result of it.”

Fergus Cullen, former chairman of the New Hampshire GOP, said it was an incredibly important moment in 2000 when Democrat Al Gore gave a speech saying he accepted the results of the Supreme Court decision to award the majority of electoral votes and presidential victory to George W. Bush.

“Had he not done that, or done so halfheartedly, or even suggested that he’d been robbed, or otherwise tried to delegitimize the results, it would have been a huge blow to our democratic process,” Cullen said.

Cullen expects Trump’s warnings about a rigged election to get even uglier in coming weeks, and he fears they will incite violence if Trump loses.

“That’s really scary,” Cullen said, recounting the violence at Trump rallies around the country leading up to the Republican National Convention. “In this country, we’ve always had recriminations after one side loses. But we haven’t had riots. We haven’t had mobs that act out with violence against supporters of the other side.’’

“There’s no telling what his supporters would be willing to do at the slightest encouragement from their candidate,” he said.

There's not much support in the GOP for what Trump is doing; and that means there'll be even less support for it on Nov, 9th.  No, the GOP is not the sole organization available for disgruntled voters after the elections; but it is an organization.  Random individuals who think the election was stolen may be able to connect with each other on social media; but they won't have an organization behind them to channel their anger toward a target.  They certainly won't have too many (if any) GOP office holders tacitly, if not explicitly, supporting their questions about whether the President was born in America or not.

And no one in the RNC wants anything to do with voter intimidation.  It's not likely they can be linked to Trump's statements, or what his statements inspire.  Trump is not the RNC's agent, he does not act on their behalf or with their approval in all matters.  But he's making life difficult for them, and that won't be forgotten on the morning after.  Indeed, even the continued support of McConnell and Ryan will end when the campaign ends.

Does anybody remember what happened to Mitt Romney in 2012?  The son of a Republican office holder (party apparatchiks don't count) and former GOP governor of Massachusetts became persona non grata in the GOP on the Wednesday after the election.  He made noises from time to time about Obama, but no one wanted to listen to him.  He was a loser, and the GOP never really liked him in the first place.  When he hinted that maybe he would return to the race in 2016 to save the GOP from the clown car that then only included Donald Trump, the groundswell of support for this idea was notable in its complete absence.  The general response of the party was:  "Don't make this worse than it already is."

What do you think is going to happen to Donald Trump on November 9th?

Who will want to listen to him for long?  He's insulted the news media, appalled the poo-bahs with his declarations that the election is only fair if he wins.   He has denigrated women, nationalities, individuals from John McCain to the Kahns to a former Miss Universe; denied everything he's ever said he did, from sexual assault to meeting Vladimir Putin, mocked the disabled, and generally shown himself a person unfit for society.  GOP senators from McCain to Ayotte had denounced him for refusing to consider conceding a loss, and the GOP wants nothing to do with his idea of self-appointed poll watchers catching vote fraud.  Michael Steele says Trump is appealing to America's "racist underbelly."

Who in the GOP, what public official, from Mitch McConnell to Paul Ryan down to the Republican mayor of any large city, wants to be associated with that?

Romney was discarded and disregarded, and he had a history with the party.  But Romney was also the unacknowledged progenitor for Trump because Romney was not an office holder when he took the GOP nomination.  His last claim to office was the governorship of Massachusetts.  He ran for President just after leaving that office, lost the nomination, and the won it for 2012.  His claim to public fame was the 2002 Olympics, which won him the praise of President Bush.  Romney, in other words, had some GOP credentials, but he ran more as a businessman than as a former governor.

Trump is the heir to Romney's claim that a businessman is what is needed in the White House, but Trump has no political experience at all.  That was supposed to be his salvation, but it has proven to be his damnation.  Political parties don't reward losers. especially those who have no political office to return to.  Jimmy Carter, Michael Dukakis, Walter Mondale; only Carter continued in public life, based entirely on his charitable and private diplomatic efforts.  He was never a force in the party afterwards, anymore than Bob Dole was, or George Bush (either one) has been.  Trump has even less claim to the party's attentions.

Jim Webb imagines he will be allowed to stand over voters and "make them nervous."  In over 40 years of voting, I've never been to a polling place where that would be allowed.  My current polling place blocks access to the room with the voting machines until you can get directly to a volunteer who checks your registration and gives you a number for the machine, and then you can only be in the room so long as you are voting.  No one would be allowed to stay there after they had voted, or if they weren't voting.  Mr. Webb imagines some scenario where he is the hero of his own action movie, but this is reality.

Donald Trump imagines he will be able to challenge the outcome of this election.  Unless it comes down to the votes cast in only one state, he'll have to file legal challenges in several states, and make all of them come out in his favor.  Whether or not he imagines that will bring him victory, this is reality.

If you read the article above carefully, you'll not they only find one person who "hopes" there will be a violent reaction to Trump's loss.  NPR found a similar sentiment among North Carolina Trump supporters, but with even less interest in revolution as a response to election failure.

And after Nov. 9th, the GOP will have never heard of Mr. Webb or Donald Trump.
Posted by Rmj at 11:41 AM