The time's they are a catchin' up 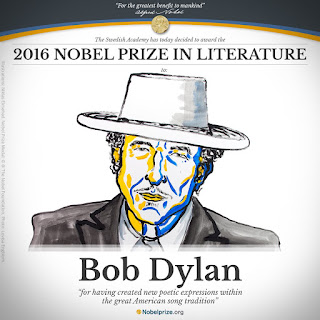 Dylan wins the Nobel for Literature.

The New York Times knows nothing about literature:

The announcement, in Stockholm, was a surprise: Although Mr. Dylan, 75, has been mentioned often as having an outside shot at the prize, his work does not fit into the literary canons of novels, poetry and short stories that the prize has traditionally recognized.


But the Nobel Committee does:

“I came to realise that we still read Homer and Sappho from ancient Greece, and they were writing 2,500 years ago,” she said. “They were meant to be performed, often together with instruments, but they have survived, and survived incredibly well, on the book page. We enjoy [their] poetry, and I think Bob Dylan deserves to be read as a poet.” *

*The preferred shorter answer is that we classify poetry as "lyric" to this day because poems were performed with a lyre for accompaniment, and yes, even Homer and Sappho's poetry (and Beowulf!) were originally chanted (as we would call it) or sung, as Homer would have put it.  They would not distinguish Dylan because he put his words to music; they would wonder why we think "lyric" poetry shouldn't have music.