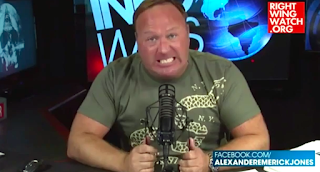 But please don't say I said so!

I am not anxious to condemn people.

I have no problem condemning thoughts.

So:  is Alex Jones a little bit pregnant?  Or is he just a little bit racist?  And why are we so afraid to call people "racists"?

Has Alex Jones gone full anti-Semite? That is the question raised by a rant on Tuesday from the country’s second-leading purveyor of conspiracy theories.


Actually, the question is:  is there a half-position?  Can one be just a little bit anti-Semite?  And is that okay, or better than the "full anti-Semite" position?

And how much of it is anti-Semitism and how much is just Jones expressing his insane conspiracy based worldview that happens to overlap with lots of anti-Semitic thought?


If Jones' "insane conspiracy based worldview" just happens to overlap with "lots of anti-Semitic thought," is it somehow just "insane," but not really disgusting?  And how do you make that distinction?  Are we trying to save Alex Jones from something?  What are we saving his ideas from? And why?

I think part of the reason is that we don't really want to love the sinner and hate the sin (nor should we, necessarily); but we really don't want to dissociate idea from person, although sometimes we should.  Politics gets particularly nasty and personal (and not just in America; recall the British MP shot to death over the Brexit issue) because we find it hard to separate the person from the cause.  But, at least in American politics, we are expected to set aside partisan differences after a Presidential campaign and accept that we only have one President at a time, whether we voted for that President or not.

I am not anxious to condemn people.  I have no problem condemning thoughts.

So, do I condemn Alex Jones to call him anti-Semitic?  Well, yes, I do.  But do I condemn him, or do I merely describe him?  "How can we know the dancer from the dance?"

Alex Jone's ideas are stupid.  There is no reason they should not also be repugnant.

Let me put it this way, via Diane Ravitch via Charlie Pierce:

Seiwert, a Pretty Prairie Republican seeking re-election against Democrat Clifton Beck, of Wichita, commented under a photo of performer Denasia Lawrence and a headline that said, "I'm so sick of these anti-American blacks — f--- Black Lives Matter." The actual post didn't delete letters from the offending word. "Go back to where you claim home," Seiwert said on the Facebook thread. "So, if they don't like it here, I believe that their freedom completely allows them to go wherever they believe is more fair and non-racist." In an interview Tuesday, Seiwert said he didn't view his remarks as racist. He said the intent was to stand up for the U.S. flag and to honor military service members who sacrificed for the country. People who don't like their job get another, or get divorced when they are in a bad relationship, he said. He said he didn't see the derogatory headline about Black Lives Matter until after he had posted to Facebook. Most of the reaction to his comments was positive, he said. "I'm not a racist. I believe in freedom," he said. "It offends me when people disrespect the flag. If unhappy, move to somewhere where you're happy."

This doesn't represent any kind of fundamental shift in the culture from my childhood 50 years ago.  I can remember people making arguments as nakedly racist as this, while insisting they were not racists.  We really haven't moved an inch from that, except we say "the n-word" now, and aren't sure we should read Huckleberry Finn aloud, and that's about it.  (Outside of quoting Twain's great novel, I don't remember anyone using the "n-word" freely, except as a severe epithet, and then only when you were sure no one around you would object.  Children, mostly, used it, to see if they could get away with it.  Now that we have the euphemism it seems, in fact, we invoke it more by its absence than once we did; but that's another irony.)   That change in usage isn't anywhere close to fundamental change.

And we still consider racism so offensive, so beyond the pale, that we can only apply the term to those who are wholly other, like white supremacists (who are, oddly, seldom further defined as "racist").

The problem is, when we label someone as racist, we label them as discardable.  We label them as outlaw, in the old sense of the term:  an exile from society, a person no longer protected by the law, a non-person.  And if we don't do that, we are afraid we will make racism acceptable.  However, by being afraid to label anyone as racist, we make their attitudes and ideas more acceptable; more acceptable than we want them to be, anyway.

What a conundrum we have created for ourselves.