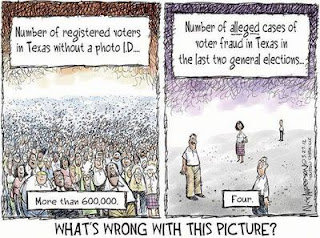 I just don't think so anymore.

With less than a month left until the election, we need all hands-on deck! History has repeatedly shown that Democrats will do everything they can to buy, steal, and cheat their way to victory at the ballot box. It is up to us to ensure that every vote here in Tarrant County is PROTECTED and LEGAL. If you are an Appointed Election Judge or Alternate Judge, please let us know if you are not going to be able to work your Polling Location IMMEDIATELY.  Tarrant County Elections has been calling Judges right now to confirm workers.  If you decline an appointment and do not resign, it is highly likely the Democrats will be able to take control of that polling location - even if it is a Republican precinct.  It is very important if you are an Election Judge or Alternate Judge and cannot work the election, that you contact us immediately at (817) 595 -0303 or email william.yeager@tcgop.org.

We will also be looking for Poll Watchers for Early Voting location sites and Election Day polling locations. We especially need poll watchers in Democrat-controlled polling locations.  Voter ID is still required in Texas.  We want to make sure OUR VOTER ID LAW IS FOLLOWED.  If you, or anyone you know, are interested, please let us know as soon as possible. We will be hosting training sessions very soon, so be on the lookout.

"Democrat controlled polling locations" is a thinly veiled reference to minority-majority precincts, as J. Gerald Hebert, the director of the voting rights and redistricting project at the non-partisan, non-profit group, the Campaign Legal Center, told the Justice Department in a formal complaint about this e-mail.

The Trump Texas campaign chair is Lt. Gov. Daniel Patrick, who said when his appointment was announced:

"My primary goal is to unite our party in Texas," Patrick said in a statement Friday announcing the new role. "I want to ensure a solid Trump win and to remind Republican voters, and the new Trump voters who came out in the primary, to support the entire Republican ticket from the White House to the Court House."

Patrick is not only a fan of Voter ID:

He wrote it into law in Texas:

AUSTIN – Nothing is more critical to our democracy than the integrity of the voting process. Citizens must be able to trust the certified outcome of every election and we must protect the voting rights of every eligible voter in Texas. That’s why I co-authored the Voter ID bill as a state senator and why we passed the Voter ID legislation.

I am deeply disappointed the Voter ID law was not upheld in its entirety by the court today. As the legal process moves forward on this important issue, voter integrity will remain a high priority for me and I am prepared to pass legislation to protect it.

There have been shenanigans already in Texas over the court's rewriting of the Texas voter ID law.  But Patrick's complaint, issued the day the law was overruled (again!*), points to a determination to keep Texas voter ID laws as restrictive as possible.

So is it possible that the Tarrant County Republican Party is acting without the knowledge or approval of the chair of the Trump Campaign in Texas?

Sure.  And I've got some land you'll want to buy in southern Louisiana, sight unseen.  Trust me, it's a great spot for a vacation home!