The times they are most certainly changin',,,, 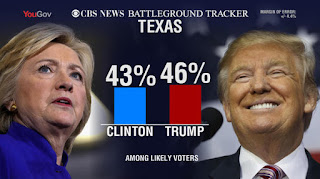 Nobody wants to believe it:

Arizona, Florida, Ohio and Texas, which account for 96 electoral votes, remain as toss-ups.


(Per the poll cited at the link, Trump leads Clinton by 2 points in Texas.)

Hillary Clinton holds a three-point lead over Donald Trump in Florida, while in Texas – a state that has voted Republican by wide margins in recent years – Trump leads by a mere three points.


(Which "lead" is literally the margin of error.)

because it's literally not supposed to be possible until we see it coming:

While the trend line in Texas presidential polling certainly justifies this speculation, there are good reasons not to go too far down the road toward speculating on – we’ll just use the phrase even though we don’t want to – Texas turning blue based on this polling. The main reason is timing: all of these polls were in the field during a period of sustained negative media coverage of Donald Trump. Two of the polls were conducted during a period in which the Access Hollywood tapes were released, Trump responded (and responded and responded), and during the second debate and its aftermath. One of them was in the field in the three days immediately following the Sunday debate. Needless to say, these were not good times for Donald Trump.


That is all just bafflegab for "No, it is not possible for Texas to vote for the Democratic POTUS candidate for the first time in several decades."  It is bafflegab because it presumes that voters have recorders in their heads that wipe out all information on a weekly basis, and since early voting doesn't start in Texas until tomorrow, these polls are too early and therefore meaningless.  We'll all have forgotten the stupid things Trump did by then, unless he does some new, and equally stupid, things next week.

And how likely is that, even for Trump?

Besides:  Texas.  One party state since God was born, and when it went from Democrat to GOP all that changed was the party label, not the reactionaries-are-too-damned-liberal neanderthal politics that has given us Gov. Abbott (who makes Perry look reasonable) and Ted Cruz (who makes us all want to forgive Phil Gramm, even for being an Aggie).

But then again:  Trump.  Voter registration in Texas is at an all time high.  Bexar County alone, whose major city is San Antonio, has registered over 1 million voters this year, a record, and a record turnout is expected on the first day of voting (Monday, October 24th).  In Houston taco trucks became famous for encouraging voter registration.  Voter registration in Texas hit 15 million, also a record.  Travis County (home of Austin) has 90% of its residents registered to vote.  Bexar County registration is up almost 13%, Harris County (Houston) registration up 6%.  Early voting turnout is expected to be high, too.  Do you think all those people are anxious to vote for Trump, when he's in a dead heat with Clinton?  And how many of those new registrants are "likely voters" being questioned by poll takers?

I don't think it's too early for me to call it:

If it doesn't happen, it won't surprise anyone.  If it does, you read it here first.