While truth is getting its boots on.... 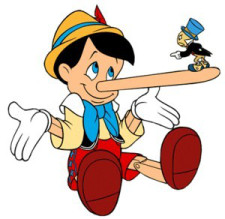 The American media is half-way around the world.

So, this is interesting:  back in August, when tout le monde (i.e., the American media) was paying attention to Donald Trump (I looked, and if my archives are any indication, we were concerned with the Clinton Foundation, which was the subject of misinformation from AP), this was going on in Sweden:

With a vigorous national debate underway on whether Sweden should enter a military partnership with NATO, officials in Stockholm suddenly encountered an unsettling problem: a flood of distorted and outright false information on social media, confusing public perceptions of the issue.

The claims were alarming: If Sweden, a non-NATO member, signed the deal, the alliance would stockpile secret nuclear weapons on Swedish soil; NATO could attack Russia from Sweden without government approval; NATO soldiers, immune from prosecution, could rape Swedish women without fear of criminal charges.

They were all false, but the disinformation had begun spilling into the traditional news media, and as the defense minister, Peter Hultqvist, traveled the country to promote the pact in speeches and town hall meetings, he was repeatedly grilled about the bogus stories.

No, it wasn't Alex Jones and black helicopters stored in FEMA tunnels under abandoned Wal-Marts; it was the Russians.

As often happens in such cases, Swedish officials were never able to pin down the source of the false reports. But they, numerous analysts and experts in American and European intelligence point to Russia as the prime suspect, noting that preventing NATO expansion is a centerpiece of the foreign policy of President Vladimir V. Putin, who invaded Georgia in 2008 largely to forestall that possibility.

In Crimea, eastern Ukraine and now Syria, Mr. Putin has flaunted a modernized and more muscular military. But he lacks the economic strength and overall might to openly confront NATO, the European Union or the United States. Instead, he has invested heavily in a program of “weaponized” information, using a variety of means to sow doubt and division. The goal is to weaken cohesion among member states, stir discord in their domestic politics and blunt opposition to Russia.

This is nothing new:

The planting of false stories is nothing new; the Soviet Union devoted considerable resources to that during the ideological battles of the Cold War. Now, though, disinformation is regarded as an important aspect of Russian military doctrine, and it is being directed at political debates in target countries with far greater sophistication and volume than in the past.

The flow of misleading and inaccurate stories is so strong that both NATO and the European Union have established special offices to identify and refute disinformation, particularly claims emanating from Russia.

The Kremlin uses both conventional media — Sputnik, a news agency, and RT, a television outlet — and covert channels, as in Sweden, that are almost always untraceable.

And you will notice, there at the end, that we caught up with current events.

An email from Blumenthal—a confidant of Hillary Clinton and a man, second only to George Soros, at the center of conservative conspiracy theories—turned up in the recent document dump by WikiLeaks. At a time when American intelligence believes Russian hackers are trying to interfere with the presidential election, records have recently been fed to WikiLeaks out of multiple organizations of the Democratic Party. But now that I have been brought into the whole mess—and transformed into Blumenthal—there is even more proof that the Russians are not only orchestrating this act of cyberwar but also really, really dumb.

The latest emerged thanks to the incompetence of Sputnik—the Russian online news and radio service established by the government-controlled news agency Rossiya Segodnya—which took words written by me and attributed them to Blumenthal.


Trump then took those words and attributed them to Clinton.  It was lies based on lies based on Russian propaganda.  And whose to say we aren't back there now?

Hillary Clinton privately said the U.S. would “ring China with missile defense” if the Chinese government failed to curb North Korea’s nuclear program, a potential hint at how the former secretary of state would act if elected president.

Clinton’s remarks were revealed by WikiLeaks in a hack of the Clinton campaign chairman’s personal account. The emails include a document excerpting Clinton’s private speech transcripts, which she has refused to release.

That, by the way, is the AP again.  This is only the latest story among many about the e-mails released by Wikileaks, mostly likely via Russian government hackers.  That isn't to say the e-mails are all false, or all contain false information.  But reporting them as if they were true just because they are in "print"?  Well, let's just say the term "useful idiots" comes back into style, too.
Posted by Rmj at 8:24 AM