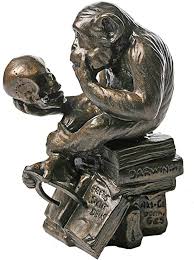 Thought Criminal has an interesting analysis of a Guardian article on the theory of evolution. The article asks a perfectly reasonable biology based question: where did the eye come from?

You may recall the gist from school biology lessons. If a creature with poor eyesight happens to produce offspring with slightly better eyesight, thanks to random mutations, then that tiny bit more vision gives them more chance of survival. The longer they survive, the more chance they have to reproduce and pass on the genes that equipped them with slightly better eyesight. Some of their offspring might, in turn, have better eyesight than their parents, making it likelier that they, too, will reproduce. And so on. Generation by generation, over unfathomably long periods of time, tiny advantages add up. Eventually, after a few hundred million years, you have creatures who can see as well as humans, or cats, or owls.

This is the basic story of evolution, as recounted in countless textbooks and pop-science bestsellers. The problem, according to a growing number of scientists, is that it is absurdly crude and misleading.

For one thing, it starts midway through the story, taking for granted the existence of light-sensitive cells, lenses and irises, without explaining where they came from in the first place. Nor does it adequately explain how such delicate and easily disrupted components meshed together to form a single organ. And it isn’t just eyes that the traditional theory struggles with. “The first eye, the first wing, the first placenta. How they emerge. Explaining these is the foundational motivation of evolutionary biology,” says Armin Moczek, a biologist at Indiana University. “And yet, we still do not have a good answer. This classic idea of gradual change, one happy accident at a time, has so far fallen flat.”

The assumption is that life moved from simple to complex, from single cell to multi-cellular, with what are absolutely spectacular specializations along the way (it isn’t just the complexity of the eye, it’s the brain that “sees” through it, another level of mystery altogether.). We wonder how that works because we assume that’s how it works: absolute simplicity to absolute complexity. But where’s the evidence for that?

Amoeba, you’ll say; or just single cell organisms. But the only link between the amoeba and me is that we are both made of cells. How is it I have eyes? A brain? A spleen?

The problem is the issue of complexity. The cells of an eye alone are more complex than a single cell organism. It’s not a question of number, but of function. And rather as Paul noted (in a very different context), one complex system of cells doesn’t function without another, such as the eyes and the brain.

We don’t know of an intermediate organism with eyes and no brain. (There are some cave animals, like the blind catfish of Texas, which have lost their eyes from generations of disuse, but that’s a different matter.) Why not? Which came first? The compound eye? The reptilian eye? Were there mammals before the mammalian eye?

The problem with complexity is that we assume it’s a rising process; that we sit at the apex of progress, the culmination of all that came before (this is the base assumption, and error, of Darwinism). So surely the past was simple, because the present is impossibly complex. And the story of history pretty much leads to now, and us, right?

Now consider the problem: everything I’ve written and you’ve read is in English (barring Google Translate). A language, in other words. Modern English, to be precise. A language with different vocabulary and grammar (somewhat) from Old English and Middle English and Early Modern English. But do you imagine Shakespeare’s English was simpler than ours? Or the English of Chaucer simpler than Shakespeare’s?

We think language must have begun as grunts and gestures and eventually one word, then two, then hundreds, then thousands. But language is not reducible to vocabulary. It is actually defined by grammar, by how words are used to communicate.

When my daughter was young she would say “I am full of hands!,” meaning her hands were full. Or she might happily tell you, “You give me the joy!” She had everything right except the grammar, but you know what she meant, might even recognize a native speaker learning, v. a speaker of another language, learning. Language is all about the grammar.

So far as I know linguists, the scientists of language, have never found a simple one. Not one used by humans, and all humans (barring impairment), use language. Where did it come from? Full blown from the brow of Zeus? Or assembled, phoneme by phoneme, subject by verb by adverb by pronoun by case by tense by…?

We don’t know of a human language without those things already. And as humans we learn the basics of the one we are raised with within a few months, become fluent within a year or two. Why? Why is language, in all its complexity, innate in us? Why can’t we find a language equivalent for an amoeba?

And what does that tell us about how complex natural systems develop from simple ones? Or does it mean it ain’t necessarily so?