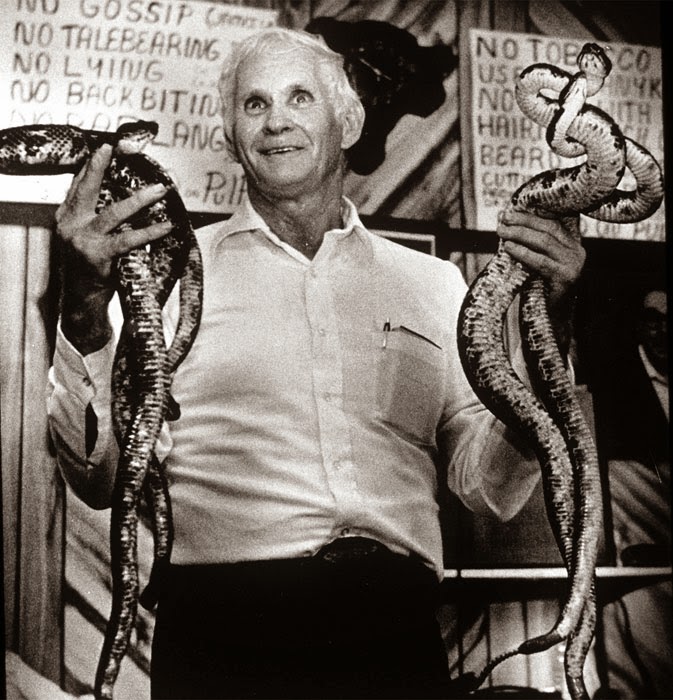 I actually endorse the sentiments in those signs.  I just don't think that's how you get there....

The story of the death of Jamie Coots is showing up on Huffington Post and Talking Points Memo.  Southern Beale, however, points me to this story from NPR last October that really deserves reconsideration in connection with Pastor Coots' death:

"I think most snakes, a rattlesnake or a copperhead, if you are gentle with them after they've been in captivity and [you] pick them up gently, they won't bite you. So, it wouldn't matter what [your] religious belief was," Gibbons says.

He does not recommend that anyone try this.


But here's the real issue:  Coots and his ilk were not rounding up snakes from the wild just before services:

The herpetologists at the Kentucky Reptile Zoo have been following the activities of Pentecostal snake handlers for years. They have watched hours of video of snake-handling services and examined snakes used in church.

"The animals that I've seen that have come from religious snake handlers were in bad condition," says Kristen Wiley, curator of the Kentucky Reptile Zoo, a facility in the town of Slade that produces venom and promotes the conservation of snakes. "They did not have water. The cages had been left not cleaned for a pretty long period of time. And the other thing we noticed is there were eight or 10 copperheads in a container that was not very large."

What's more, she says there was no fecal material in the container, which indicated the snakes were not being fed. Riley says a snake that may be dehydrated, underweight and sick from close confinement is less likely to strike than a healthy snake. Moreover, the venom it produces is weaker.

She says snake-handling preachers who don't take care of their snakes are "setting themselves up for a safer encounter during their services when they use a snake that is in bad condition to begin with."

This, to me, was the clincher:

When we visited the snake room behind Coots' house, there were about 30 snakes — mostly timber rattlers and copperheads — crowded into glass cages. He says he waters them regularly but that his supplier of live mice and rats moved away. And many of the snakes won't eat anyway.

Well, that and the fact snakes in captivity can live from 10-20 years or longer, and Coots says his snakes only lasted 3-4 months.

I don't think Coots was trying to scam anyone.  I think he truly considered snakes dangerous and, by the same token, unworthy of any consideration.  Just the idea of handling snakes to prove one's worthiness to God is clear evidence of that.  That the snakes died in a few months was just another sign they were unfit for God's creation, that they were of the devil and so corrupt and full of death.  Perhaps, if he thought about it at all, he reasoned that God hated snakes, too, and so snakes didn't live long in the wild or in captivity.  I can imagine the justifications.

Rationalization is a powerful force.  I mean, you never hear a news report of someone firing a gun because they were stupid, or careless.  It's always "accidental" and the gun always "goes off."  I don't think guns are really any less dangerous than snakes.  It's the handler that can make the close contact safe or extremely dangerous, just as a gun is safe, or not, depending on how you handle it.  But we humans love to shift responsibility. And in the end, if this blog has an unofficial motto, it's the words of Jacques Derrida:  "Religion is responsibility, or it is nothing at all."

Perhaps Pastor Coots took responsibility for his religious beliefs; but perhaps he would have been more responsible by recognizing even snakes are part of God's creation, and deserve to be treated at least as he would want to be treated; which is to say, mostly left alone.