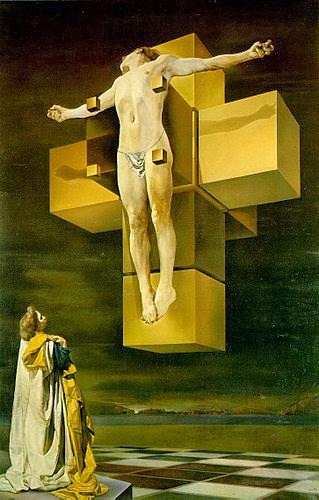 Let's start with this comment, which is very nearly perfect:

Is it all right if I quote the Scriptures? :-)

He has told you, O mortal, what is good;
and what does the Lord require of you
but to do justice, and to love kindness,
and to walk humbly with your God?

If only because it incorporates the scriptures along with a trust in the reality of God that isn't dependent upon someone else's idea or assent, and that doesn't, equally, try to establish a hegemony from the idea of God.*

That sounds like a slap at everyone else, and I don't mean it that way; but I'll circle back to the point.

Texts and questions are like a Rorschach inkblot:  the answers reveal so much about the person answering.  Bonhoeffer's religionless Christianity, for example, would probably in reality resemble Freemasonry (such is the way of the world).  What it would not resemble is the "liberal theologians" dream,  or Camus' world of plague, or be a religion without religion which would be...secularism?  Let me quote again what I quoted below.  Bonhoeffer starts with a question:

"What is bothering me incessantly is the question what Christianity really is, or indeed who Christ really is, for us today" (LPP 279). For Bonhoeffer, Christianity’s identity was a problem because the world had "come of age;" that is, the world had become conscious of itself and the laws that governed its existence, and thus it did not need the trappings of religion any longer:


The "trappings of religion" is the issue here.  What are the "trappings of religion"?  Buildings?  Spires?  Stained glass windows?  Pews?  Organs? Pulpits?  I know of churches which have done away with all of those things.  Is that the "religionless Christianity" Bonhoeffer meant?  Knowing his work, I daresay he'd think many of those churches were closer to Christian-less Christianity.  And that's not what he was advancing.  Why?  As he makes clear, the issue is much more subtle and complex than that:

The time when people could be told everything by means of words, whether theological or pious, is over, and so is the time of inwardness and conscience – and that means the time of religion in general. We are moving towards a completely religionless time; people as they are now simply cannot be religious any more (LPP 279).


I apologize for the poor formatting in the previous post; it probably contributed to the confusion.  Bonhoeffer makes a sweeping critique here, but one I think many of us would agree with, especially in the present day.  I'm intrigued by the idea that "the time when people could be told everything by means of words...is over."  In this day of cable TV and the internet where everything, even streaming videos, depends so much on words (how else does FoxNews communicate?  Or the Tea Party?), I think Bonhoeffer is still right.

We could discuss that.

He goes on to say the "time of inwardness and conscience" is over, and so the "time of religion in general" passes with the passing of these two eras.  Obviously he has a specific concept of religion in mind, but we should all be specific.  Before we get to that last sentence, let's reflect a moment on what he doesn't mean.

To understand what Bonhoeffer meant to affirm by religionless Christianity, his concept of ‘religion’ must first be grasped. In continuity with Feuerbach, Bonhoeffer regarded religion as human dependence upon God at the boundaries of life. He gave specific content to this by defining religion more precisely as individualism (the psychological attitude of a subject) and a metaphysical system (Gruchy 1991, 38). Both aspects of religion are faulty: individualism promotes an un-Christian retreat from the world, and religion’s attempt to provide a secure metaphysical explanation of salvation enables people to escape the challenge of the gospel (Gruchy 1991, 38). Moreover, in a world "come of age," religion’s psychologism and metaphysical claims about God simply cannot be accepted. Therefore, Bonhoeffer saw religion as a genuine hindrance to true faith in Jesus Christ.

If this analysis is correct, Bonhoeffer is staying true to The Cost of Discipleship and, even more importantly, to his Ethics.  It is one of the benefits of old age (or at least to get past youth) to recognize that what was true and simple when you were young, is still true, but is not simple.  I'm especially intrigued by Bonhoeffer's idea of dependence on God at the boundaries of life.  It's an insight I had in seminary, and it's probably due to Bonhoeffer more than anyone else that I realized it. It leads to what I've labeled "vulture theology," a common expression among many pastors I know that while the church may lose the youth as soon as they are old enough to stay home on Sunday morning, that we'll get 'em back when they have kids, or need a funeral, or face a crisis (financial, personal, existential, doesn't matter).  It's a rather gruesome hope for sustaining an institution that's supposed to be upheld by the God of the living and of all life.

Notice there, too (and again, I blame the poor formatting on the last post; I don't know what went wrong there), Bonhoeffer defines religion in very negative ways.  It is individualism ("religion is a private matter!") and the metaphysical system.  Both, Bonhoeffer thought (rightly, I think) led individuals away from the claims of the Gospel to be in the world while not of the world (try it.  It's quite a struggle.  That struggle is real.)  Individualism promotes a retreat from the world to what makes me happy and comfortable; the metaphysical system makes salvation paramount and secures you from any of the challenges of the gospel.  After all, if I'm saved, if my one hope is in a metaphysic that puts my soul at the center of a cosmic system of divine justice and retribution, what need I care for my fellows, except as a random act of kindness?

And the more atheists fight with Christian concepts of a metaphysical realm more real than this one, where the true life is finally lived, the more we help them make religion a hindrance to true faith in Jesus Christ.

And what would true faith be?  What does the Lord require of you?

According to Bonhoeffer, the church has failed in its mission to the modern world because it was not able to separate the message of Christ from religious trappings. The church used God as a metaphysical deus ex machina, a God of the gaps that filled the holes of our knowledge. Bonhoeffer noticed that as secularism increasingly permeated the lives of modern people, this metaphysical God of the gaps was being pushed further away into irrelevance. The Church’s response was to stake out the inner life of the person for God, thus summoning up God to answer "ultimate" questions like death and guilt. For Bonhoeffer, this signaled a retreat into subjectivism, into the personal categories of sin, despair, and anxiety over against the objective work done by God in Jesus Christ. Moreover, it only affirmed a God found in weakness, not in strength, a God at the periphery of our existence, not the center.


Vulture theology is a subset of the "God of the gaps" theology.  If we cannot reconcile the classical metaphysical system with present-day science, we push God into the places science can't yet go, and all that does is allow secularism to push God further away.  God becomes the last resort, the place that, when we have to go there, God has to make us whole.  And when God fails to do even that, then what's the point of God?  And about this time the critique of "liberal theologians" kicks in.  God as the answer to "ultimate" questions is a direct swipe at Paul Tillich.  I'll say up front I'm no fan of Tillich.  His Systematic Theology is supposedly founded on Kierkegaard's thought, but the very first thing Kierkegaard opposed was the systematic thinking of Hegel, which is pretty much what Tillich brings to the discussion.  Had he been alive, Kierkegaard would have started a third round of his authorship just to oppose Tillich who, ironically, is the father of systematic theology as a course of study in most seminaries.  Bonhoeffer opposes this retreat into "subjectivism," an opposition I'm sure Kierkegaard would join him in (when S.K. wrote "Truth is subjective," he didn't mean it's personal).  And I certainly agree with Bonhoeffer's criticism that affirming God in weakness, the "God of the gaps," is putting God at the periphery of our existence, not at the center.

Which brings us back to the comment I started with.  When I was a pastor, I was working on the idea that worship had become, even for believing Christians (never mind the baptized heathens), a matter of a Sunday morning filling station.  That is, you came to church on Sunday morning to get your spiritual tank refilled, much as you have to refill the gas tank of your car from time to time.  Bathed in the comfort and reassurance that God loves you and wants you to be just as you are, without one plea (except "Please, sir, I want some more!", which God would surely grant), you go out into the world and struggle with it as a car struggles against friction, until your energy source is used up and you return for another refill, in a week.

God as endless commodity, in other words.

What I wanted to do was shift the perception, change the assumption:  what if, instead of coming into the presence of God for a spiritual recharge or refill, we came into the presence of the living God with fear and trembling?  Not the fear induced by horror movies or the thought of destruction or the loss of loved ones or a job, but the existential awe that creates an awfulness (in the old sense of the world, being filled with awe) at the nature of God, an awe that would put the world in perspective.  Sort of the positive version of "eat a live frog first thing everyday, and nothing worse will happen to you all day."  If, on one morning of the week, you encountered the living God, the one not present in the storm, though there is a storm, not present in the earthquake, though there is an earthquake, the one who made Sinai shake and tremble until the Hebrews told Moses to talk to God for them, because they were afraid; if you encountered the presence of that God, wouldn't your week be different?  Wouldn't what loomed so large suddenly seem small?  Wouldn't you be more inclined to think you don't need to sweat the small stuff, and that it's all small stuff?  What difference might it make if you came to worship wondering what the Lord requires of you, rather than what you require of the Lord?

Would that be a religionless Christianity?

*Any establishment of a system, especially for an idea about God, runs the risk of being established against other ideas, and implicitly declaring those ideas inferior; and on what basis, except preference?