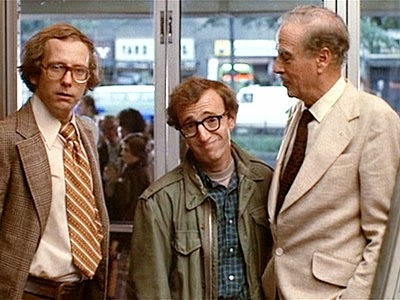 And yes, I know, we're all supposed to despise Woody Allen right now...

Like police, politicians and the Mafia, Christians never turn on each other.

Let me know when said debate is scheduled. It will mark the beginning of real, productive dialogue.

On the Wednesday edition of his TV show, “The 700 Club,” Robertson indirectly implored Ham to put a sock in it, criticizing [Ken] Ham’s view that the Earth is only 6,000 years old.

“Let’s face it, there was a bishop [James Ussher] … who added up the dates listed in Genesis and he came up with the world had been around for 6,000 years,” Robertson began. “There ain’t no way that’s possible … To say that it all came about in 6,000 years is just nonsense and I think it’s time we come off of that stuff and say this isn’t possible.”

“We’ve got to be realistic that the dating of Bishop Ussher just doesn’t comport with anything that’s found in science,” Robertson continued, “and you can’t just totally deny the geological formations that are out there.”

“Let’s be real,” Robertson begged, “let’s not make a joke of ourselves.”

I'm not sure how productive this debate would be, but Robertson has a point.