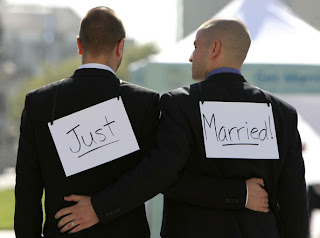 I have no legal expertise in the matter, but this could be interesting:

Wednesday's hearing combines two cases, one from Mark Phariss and Victor Holmes who filed a federal civil rights lawsuit complaining that Texas' ban unconstitutionally denies them the fundamental right to marry because of their sexual orientation. The other lawsuit was filed by Cleopatra De Leon and Nicole Dimetman, who argue that Texas officials are violating their rights and those of their 2-year-old child by not recognizing their marriage license from Massachusetts.

This is why I find it interesting:

This case presents a constitutional question never addressed by this Court: whether a statutory scheme adopted by the State of Virginia to prevent marriages between persons solely on the basis of racial classifications violates the Equal Protection and Due Process Clauses of the Fourteenth Amendment. [n1] For reasons which seem to us to reflect the central meaning of those constitutional commands, we conclude that these statutes cannot stand consistently with the Fourteenth Amendment.

In June, 1958, two residents of Virginia, Mildred Jeter, a Negro woman, and Richard Loving, a white man, were married in the District of Columbia pursuant to its laws. Shortly after their marriage, the Lovings returned to Virginia and established their marital abode in Caroline County. At the October Term, 1958, of the Circuit Court [p3] of Caroline County, a grand jury issued an indictment charging the Lovings with violating Virginia's ban on interracial marriages. On January 6, 199, the Lovings pleaded guilty to the charge, and were sentenced to one year in jail; however, the trial judge suspended the sentence for a period of 25 years on the condition that the Lovings leave the State and not return to Virginia together for 25 years.


Granted, the difference in Loving is that Virginia had criminalized interracial marriages.  Then again, how do you ban marriage between men and women of different "races" (I use the term advisedly, frankly) except to make it criminal?  Far easier to simply say the state won't recognize same-sex marriages, that they are a legal nullity.  It doesn't make the ban any less repugnant, IMHO, but it does tend to lower the threshold just a bit.  It certainly changes the application of the due process argument, a central part of the ruling in Loving.

It might, in other words, be enough of a distinction for the very conservative 5th Circuit.  Because otherwise, I have a hard time seeing how at least one claim here isn't on point with the Loving decision.

In upholding the constitutionality of these provisions in the decision below, the Supreme Court of Appeals of Virginia referred to its 1965 decision in Naim v. Naim, 197 Va. 80, 87 S.E.2d 749, as stating the reasons supporting the validity of these laws. In Naim, the state court concluded that the State's legitimate purposes were "to preserve the racial integrity of its citizens," and to prevent "the corruption of blood," "a mongrel breed of citizens," and "the obliteration of racial pride," obviously an endorsement of the doctrine of White Supremacy. Id. at 90, 87 S.E.2d at 756. The court also reasoned that marriage has traditionally been subject to state regulation without federal intervention, and, consequently, the regulation of marriage should be left to exclusive state control by the Tenth Amendment.'

We don't use quite such blatantly racist language in court opinions or statutes anymore, but the arguments against same sex marriage pretty much rest on preserving the integrity of marriage as well as the "sanctity" of marriage (an issue in which the state has no legitimate interest, since I take "sanctity" to be a religious concept).  And that last line could as easily be the words of Texas Attorney General Greg Abbott:

"The attorney general's office will defend the Texas Constitution in this case just as we do in all cases where state laws are challenged in court," Abbott's spokeswoman Lauren Bean said. "The U.S. Supreme Court was clear that states have independent authority to establish their marriage laws."

Not that the Supreme Court said states have carte blanche to establish any marriage laws they please, mind:

While the state court is no doubt correct in asserting that marriage is a social relation subject to the State's police power, Maynard v. Hill, 125 U.S. 190 (1888), the State does not contend in its argument before this Court that its powers to regulate marriage are unlimited notwithstanding the commands of the Fourteenth Amendment. Nor could it do so in light of Meyer v. Nebraska, 262 U.S. 390 (1923), and Skinner v. Oklahoma, 316 U.S. 535 (1942).

So Abbott is posturing for the cameras in that press release.  I'm sure his briefing attorneys will present a much better legal argument.

This is where my knowledge of the law breaks down.  Loving is not a solitary decision; it has been interpreted since by the courts, and may have seen it's conclusions expanded beyond the racial discrimination grounds the Court was primarily concerned with in that case.  Loving does rest on a due process argument which isn't applicable here; and the equal protection argument of the case is primarily concerned with racial discrimination.  So I'm not sure Loving is dispositive in these cases, but subsequent rulings have probably used it to support arguments regarding same-sex marriage.

There's also simply the question of comity:  how do you deny a marriage in one state, in another state?  I find the legal basis for that rather bewildering.  It seems to me any state that wanted could require all marriages to be performed in that state, for a fee paid to the state (don't laugh; Texas more and more relies heavily on fees to fund state government), and all out of state marriages are void unless the fee is paid in that state (again, say: Texas).

Would that be defensible?  If not, then why is it defensible for Texas to refuse to recognize certain marriages from other states, but not other marriages?  Seems to me, in fact, that's where the equal protection argument takes hold.  On what basis do you declare some marriages valid, others not, when there is no effect on society (I'm thinking of bigamy, degrees of consanguinity, and marriage of minors here)?  The only grounds for banning same sex marriage is that it is not traditional.

And I don't think that's enough to escape an equal protection analysis.*

*DOMA, by the way, was a Federal law.  It violated due process and equal protection, but under the 5th Amendment, not the 14th.  There really isn't enough similarity between U.S. v. Windsor and Loving for me to be comfortable making an analysis of Texas law based on Windsor.  On the other hand, Windsor seems to be the decision all the Federal courts are going to. The court in Kentucky ruled that the state cannot refuse to recognize out of state marriages on an equal protection argument.

I'm optimistic that's where this is going now.  We'll just have to see.
Posted by Rmj at 5:00 PM