The fruit of the tree of the knowledge of....um, wait, what? 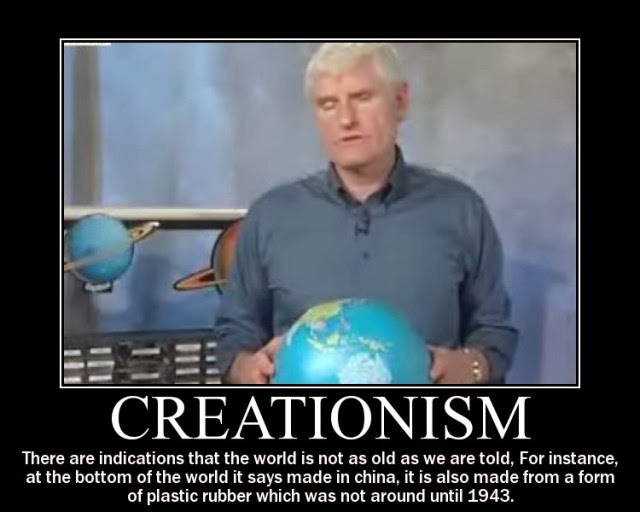 I would send Mark Joseph Stern some Chick Tracts; but I'm afraid the shock would kill him.

What he describes here is not really too different from my childhood in East Texas.  I knew people who were determined to raise their children in at least some measure of ignorance.  To me, the ignorance that mattered was Christian doctrine. I started reading Kierkegaard at 17 in response to the mind-numbing vulgarities that were passed on to me as "Christianity."  I kept the Christian faith; I discarded the stupid.

I met the children of fundamentalists, even then.  I knew families who had been normal and suddenly became irrational, and I had arguments with them about the "literal inerrancy" of the Bible.  I learned quickly you couldn't win, that they would hold fast to their doctrine that every word in the Bible was literally true, even when it couldn't be.  What you gonna do with folks like that?

Stop discussing religion with them; that's all you can do.  Avoid them like the plague, because they are worse than Amway sales reps.  (Funny how people don't freak out about Amway sales reps; they can be just as obnoxious as people who want to save your soul.)

But dangerous?  All I can say is, they tried to control the Texas Board of Education, and while that august body is still several bricks shy of a load and their elevator still doesn't reach the top floor, in a one-party GOP state, the fiercest of the fundies and creationists on the BofE were removed in a GOP primary election(!!!!!).  We don't pay enough for education in Texas, and we don't pay enough attention to it; but we still don't want our kids being taught pure bullsgeschicte.

Stern insists, however, that this is the end of civilization as we know it, if we don't watch out:

It’s easy to scoff at all this, to giggle at the vivid weirdness of young Earth creationism and then shrug it off as an isolated cult. But the 40 percent of Americans who reject evolution, as well as the tens of thousands of children or more who are being brainwashed with it in publicly funded classrooms, aren’t laughing. Creationism is built to metastasize; those who believe it won’t rest until everyone else believes it, too. True believers yearn for the rest of us to be locked up in the same mental prison where they have consigned themselves and their children. They insist that evolution has robbed us of our humanity. But in reality, it’s their twisted gospel that aims to strip us of the very thing that makes us human.


That "tens of thousands of children" claim refers in part to some charter schools in Texas, which I'd like to see shut down, too.  All of 'em, for my money, even the ones that are supposedly doing a good job.  I'm no fan of charter schools, especially not when Texas schools are so strapped for cash.  On the other hand, I suspect the kids being taught creationism would get the same information at home, or the parents in a public school would be complaining about "godless evolution" (and there is more of a fight on that front in Texas education than there should be).  But is it the end of civilization?  In a state still heavily dependent on knowledge of geology for money, I'm not too worried that we're about to turn out a whole generation of Ken Ham disciples.

Besides, the "40 percent of Americans who reject evolution" claim is not quite right.  "Built to metastasize"?  Then why hasn't the percentage changed significantly in the past 3 decades?  According to Gallup:

I'm curious as to what the percentages were before 1982, and when "creationism" was formulated as a doctrine (1982?  Earlier?  Later?  I dunno.)  There is also a correlation to church attendance (those who attend church weekly are most likely to agree with what Gallup calls the "creationist explanation") and with education level attained.  Not too surprisingly, those with only a high school education are most likely to agree with the "creationist explanation."

Which brings us back to what we teach in public schools, and how well we teach it.  It's only been within the last year that Texas has allowed the teaching of "alternatives", and I don't think that even took effect until this school year.  Yet the percentage of Americans who prefer "creationism" has remained effectively the same since 1982.  Kind of hard to blame that on the creeping influence of Ken Ham or charter schools.

After all, most of these idiotic ideas have been around for a long time.  I didn't get any creationism in my public school education in Texas, but neither was I told the only explanation for life was evolution, and that excluded God (a la Richard Dawkins & Co.).  I have a lot of complaints with public education in Texas; but I'm not setting my hair on fire that the whole state, much less the whole country, is about to descend into a new dark ages (or, conversely, that we're all about to become atheists).  The true believers have always yearned to lock the rest of us up in the same mental prison they live in.  It's what keeps Chick in tracts.

But just because somebody somewhere is crazy, doesn't mean it's as contagious as a movie epidemic.  Viruses in real life don't spread as fast or rabidly as they do in movie plots, and bad ideas will never turn us all into mindless zombies a la "Resident Evil," either.

So, maybe, if instead of focusing on teaching data (which is all AP classes really emphasize) we taught kids to think instead:  to reason, to question, to examine, to take nothing at face value and question everything critically and deliberately; we wouldn't even have as many high school graduates who thought nonsense like "creationism" made any sense at all.