What belongs in the Agora 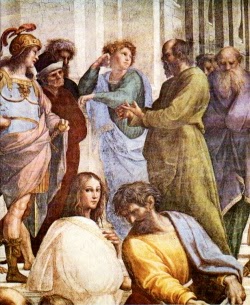 I suppose you could say he's selling something....

Because one post really won't capture it, let me pick up yet another aspect of this "evolution v. creationism" debate.

So evolution is not anti-religion in general. But is it atheistic? No. Evolution takes no stand on the existence or lack thereof of a god or gods. Whether you think life originated out of ever-more complex chemical reactions occurring on an ancient Earth, or was breathed into existence by God, evolution would take over after that moment. It’s a bit like the Big Bang; we don’t know how the Universe came into existence at that moment, but starting a tiny fraction of a second after that event our science does a pretty fair job of explanation.


That's pretty much how I learned it, growing up as one of God's Frozen Chosen (Presbyterian).  I might also point out, ad nauseum at this point, that the scientist who formulated the Big Bang theory was a Jesuit priest; and the genetics that are all the rage with Richard Dawkins, et al., started with a monk.

So even science isn't "anti-religion" or atheistic.  But the question swirling at the moment is:  should Nye have debated Ham?  Phil Plait says "yes," because:

Roughly half the population of America does believe in some form of creationism or another. Half. Given that creationism is provably wrong, and science has enjoyed huge overwhelming success over the years, something is clearly broken in our country.

I suspect that what’s wrong is our messaging. For too long, scientists have thought that facts speak for themselves. They don’t. They need advocates. If we ignore the attacks on science, or simply counter them by reciting facts, we’ll lose. That much is clear from the statistics. Facts and stories of science are great for rallying those already on our side, but they do little to sway believers.

Well, frankly, that depends on what "believers" you are talking about.  Since schools do little or nothing to teach religion (which would actually be a good idea, at least from the Huston Smith/world religions and people are fundamentally religious point of view, a position I consider as undeniable as the fact that people are social animals) and a great deal to teach science, I don't think the problem is really a matter of teaching either science fact or science reasoning.

I think the problem is that we don't teach philosophy; at all.

It could easily be done.  Since my days as a college student the Norton Anthology has added excerpts from the Bible to its anthologies, without expressing any opinion about which version of Christianity or Judaism one should ascribe to.  They also include passages from the Baghavad Gita, but no one expects us to proselytize for Hinduism by assigning those texts.  Admittedly, especially in public school classrooms, you could have teachers who wouldn't distinguish between the objective knowledge of the subject and the subjective knowledge; but you have that problem now with science education.  We aren't going to solve that problem by excluding science from the curriculum.  We can solve it by insisting on a fuller picture of human reality.  We can teach science without trying to turn every student into a physicist, a chemist, or a biologist; we can teach religion without proselytizing.

And the benefit would be to emphasize the distinction between the two ways of thinking.  I'm not arguing here for NOMA; I think that's a rather ridiculous distinction.  But the problem with 'creationism' is that it sounds like science, and it sounds like Christianity, when it is neither.  It is impossible to understand that, however, unless you better understand both science and religion, and how they fundamentally differ.  You can try to just say "They aren't the same," but unless you clearly delineate those differences, and study the limits and the contents of both subjects, you can't really establish that assertion.

I think the fact that so many Americans today believe in "creationism" pretty much proves that.  I grew up with prayer in schools and far fewer distinctions between secular life and religious life, in a Southern Baptist dominated small East Texas town.  But it was a town built on the oil business, populated by geologists and engineers and other learned professionals, who had no problem accepting that the earth was billions of years old and that oil came from plants and animals which predated Noah by millenia.  It things have gone to smash since then, it is perhaps because we have insisted too much since then on keeping certain ideas out of the public discourse of the public schools (about the only place we have a public discourse anymore).  Perhaps it is time we reconsider what our definition of "church" and of "state", and what about them must be kept separate.

Science is a philosophy. It is not a source of access to the only truth available to humankind, if only because science will never adequately explain why I love my wife and my daughter, or why I am so moved by the music of Stephen Sondheim, J.S. Bach, and medieval plainsong.  Most people, of course, wouldn't insist that it should.  If anything, that I am moved by art is an argument for teaching more about art in public schools, too; another area we have failed in over the decades.

Phil Plait says:  "The conflict over the teaching of evolution is based on the false assumption that evolution is antagonistic to religion."  I agree.  And the solution to that is not simply to teach more science.

It is also to teach more religion; just not in the sense most people think.  But then, if we did, we'd solve that problem too, wouldn't we?
Posted by Rmj at 8:00 AM