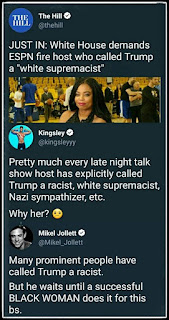 ESPN is paying a really big price for its politics (and bad programming). People are dumping it in RECORD numbers. Apologize for untruth!
— Donald J. Trump (@realDonaldTrump) September 15, 2017

Now, about that whole "birther conspiracy" theory you had for so long.

When can we expect an apology for that "untruth"?

And by the way:


We have made more progress in the last nine months against ISIS than the Obama Administration has made in 8 years.Must be proactive & nasty!
— Donald J. Trump (@realDonaldTrump) September 15, 2017

The Obama Administration is over, so it hasn't made any progress on any issue since your inauguration in January.  Government is not a business, and you aren't in competition with Obama or Hillary Clinton.