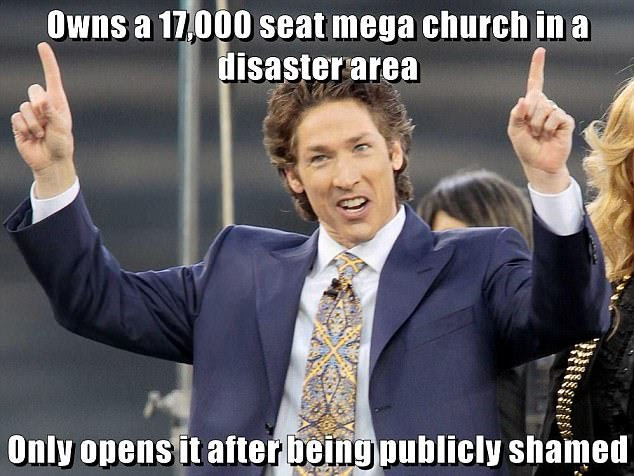 I don't think much about Joel Osteen who, as I noted five years ago, has pretty much vanished from public view.  He still has his mega-church, but his impact is minimal on the public, except for the recent fracas about shelters from the storm in Houston.  I started thinking about him again because Daily Beast prompted me to:

Osteen’s church fumbled the response to Harvey not because they are hypocrites. They fumbled because they are believers. They are focused on personal success, not community service. And like the adherents of New Thought, aka The Secret, aka The Law of Attraction, aka The Teachings of Abraham, prosperity gospel believers think you can manifest your own reality, and God rewards you according to your faith.

And if anyone looks too closely at what that theology means for people whose lives have just been destroyed, the answer is obscene.


I left that update in because I hadn't heard this yet.  The Daily Beast article had noted that:

Unlike other natural disasters, such as Hurricanes Katrina or Sandy, no preachers (prosperity or otherwise) have yet blamed Harvey on human sin. Perhaps, as Kimberly Winston wrote in Religion News Service, that’s because Harvey hit Texas—with its large conservative Christian community, its conservative governor and lieutenant governor, and Houston’s recent repeal of a pro-LGBT ordinance—rather than libertine New Orleans or liberal New York. The same thing happened when floods ravaged the Deep South in 2011: Suddenly, God had nothing to do with the weather.


So somebody had to reverse that, I suppose.  Interesting that God's aim is so poor God has to punish Houston by striking all of the Texas coast, scrubbing Rockport off the map (what did they do to offend God?), and causing destruction in cities from Victoria to Beaumont (where they have no water for the foreseeable future; the floods took out the treatment plant).  I guess Houston is the cause of their punishment, too?

I will admit I know nothing about Osteen's worship services.  According to Salon Osteen only mentions Jesus extensively at Easter (how he avoids it at Christmas is another mystery), and I wonder if Osteen observes the sacraments and preaches the Trinity.  Those are the bottom line requirements for Christianity among the many sects who otherwise consider whole denominations damned and heretical (no, not Rome; but many Protestants still think that about Rome).  One:  that communion/eucharist and baptism are sacraments; that baptism is performed in the name of the Trinity; and recognizing Jesus Christ as Savior and Lord.  Yeah, a lot depends on definitions, but does Osteen baptize people?  Do they observe communion as a sacrament?  Is Jesus Savior and Lord because Jesus makes you rich?

Frankly, I'm wondering how "Christian" Osteen's church is; because I think that description of its attitude toward those who need help from Daily Beast is pretty much dead on.