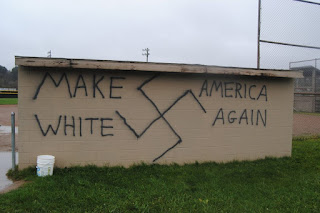 "By focusing on that sympathetic laboring class, the sins of whiteness itself were, and are still being, evaded."
--Ta-Nehisi Coates

Rachel Martin has a sad, because Ta-Nehisi Coates' analysis of racism in America doesn't leave her with a savior who will fix it for us.

There is a profound difference between what's going on in Houston, and what's going on in America. Houston faces concrete problems which can be solved if we are willing to do what it takes to solve them, which mostly means:  spend the money, including the money lost to more development of areas that will simply be flooded by the next "unprecedented," but not at all unpredictable, storm.  What America faces is a more abstract problem:  it faces the "hidden wound" of its inherent racism, a racism that started literally with Columbus landing here and making slaves of the natives, and continues to this day, because it was literally slavery and racism that this country was built on.

But we can't admit that; "we" being white people, to whom the wound we inflicted on ourselves and our descendants for generations upon generations, is hidden.  It isn't hidden from those who suffer from that racism, like Mr. Coates.  Oddly enough, it wasn't hidden on Saturday Night Live not so long ago:


"This is the most shameful thing America has ever done."

Yeah, we're gonna be stuck there for awhile.

Once upon the field, these men became soldiers, statesmen, and scholars; held court in Paris; presided at Princeton; advanced into the Wilderness and then into the White House. Their individual triumphs made this exclusive party seem above America’s founding sins, and it was forgotten that the former was in fact bound to the latter, that all their victories had transpired on cleared grounds. No such elegant detachment can be attributed to Donald Trump—a president who, more than any other, has made the awful inheritance explicit.


Need to spend some time reading Mr. Coates' thoughts on this.
Posted by Rmj at 11:40 AM