Speaking of being entertained..... 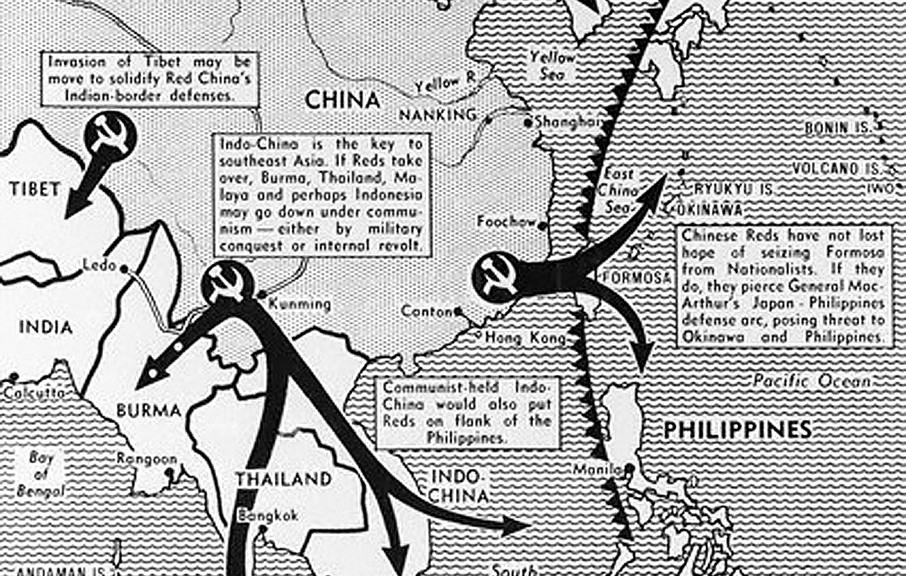 The problem with film reviews is that they inevitably over-simplify.  If, as "Frank Snepp, a former CIA officer in Vietnam who went on to become an award-winning TV journalist in Los Angeles," says, "Parsing the difference between an anti-colonial insurgency and a civil war 'is fairly easy to explain in print, but I don’t know how you do it in...a documentary,' ”  how much less so can you reduce three hours of film (two episodes, in this case) into a few snappy words, and not leave things out?

This critique by Jeff Stein leans heavily on the words of  Chuck Searcy, an Army intelligence analyst during the Vietnam war.  Searcy's critique references only the first two episodes of the show, and boils down to the fact that what is said in the first episode is not repeated, apparently with sledge-hammer blows, in the second.  Having only seen the first episode, and not yet the second, I can only say:  huh?

The documentary begins with the origins of Vietnam itself, a country created by the French in the latter half of the 19th century.  I'm hesitant to say precisely which year it was created, as the documentary only says the French entered southeast Asia (or was it Indo-China then?) in 1858, and took 50 years to subdue Cambodia, Laos, and the country that would come to be known as Vietnam.  The implication is that the French created the long, thin coastline of a nation, and then set about exploiting it.  Move forward to the 20th century, and Ho Chi Minh is trying to meet with Woodrow Wilson and establish independence from France for his country.  Minh's history is briefly but carefully outlined as he becomes a socialist in France, then reads Lenin and becomes a communist, then eventually returns to Vietnam to start the fight for independence.  As the review points out, the U.S. during World War II connects with Minh to oppose the Japanese, who replace the French briefly as rulers of the country.  But after the war, despite Minh's appreciation for Jefferson and the Declaration of Independence, the fear of China taking over Asia as Russia did eastern Europe, turns Truman and all right-thinking Americans against any change in status quo in southeast Asia, which is to say any rule that isn't European and therefore "safe."

Are these things right, or wrong?  Well, the documentary doesn't make them seem right.

This history is not presented as good, sound, inevitable, or for the benefit of U.S. national security.  As one analyst puts it, the U.S. misread the situation entirely, and far from seeing nascent countries emerging, saw only the fear of spreading communism toppling dominoes and setting up a ring around Asia back into Europe.  The Cold War imagery sneered at in the review is simply history:  an illustration of what finally became known as the "domino theory," an idea we hear even Eisenhower (who hesitated to support the French without Congressional authority, which wasn't forthcoming) espouse.  Those of us who know our history even a bit, remember who long the "domino theory" continued to shape U.S. policy, even though no part of it ever proved out by events.

Interestingly, these history lessons are interpersed with memories of the war decades after these events, with Karl Marlantes, the author of one of the best novels about the war, recalling a firefight he was caught in.  Marlantes points out humans are not the dominant species on the planet because we are nice, and rejects explicitly the idea that the military teaches people to kill,  It is only, he argues, finishing school.  These interruptions remind us of what lies in the future for Vietnam, and for us.

The division of Vietnam, glossed over in the review (see what I mean about simplifying?) results from the defeat of the French at Dien Bien Phu.  I knew the place name from my childhood, but never knew what had happened there.  Essentially the French dug in on the valley floor, indifferent to the jungle covered mountains around them, and the Viet Minh set up heavy artillery all around them, camouflaged from the French jets looking for just such evidence of firepower.  The French were trapped as the Viet Minh rained hell on them, with only airlifts possible to save them and provide supplies.  Previously, we learned, even Sen. John Kennedy, visiting Saigon, had no sympathy for the French or their inability to hold their former colony.  One remembers, in that telling, Michael Corleone in Havana just before Castro arrives, aware already of what the future holds.  Of course that's a fiction, and Kennedy's visit is history, but it leaves the same impression:  we cannot stop this tide of history, and we shouldn't try to.  That was in the 50's, and the Vietnamese independence struggle had been going on for decades.  Bt the time of Dien Bien Phu, however, American attitudes had shifted, and Kennedy, among others, is convinced we have to help the French, at least because they were being slaughtered.

That is the central event which lead to the division of Vietnam into north and south along the arbitrary line of the 17th parallel.  It was a conscious effort to replicate the armistice of the Korean War (with the implication that, once again, commies would only get the northern part, not the whole hog).  The deal was supposed to include a vote to reunify under one government, which  was widely expected to be that of Ho Chi Minh, the communist.  However, Diem took power (through a clearly rigged election; he claimed 92.8% of the vote) and broke off any idea of a unification election.  He had, as the documentary makes clear, the upper hand because he was the only hope the U.S. had of stopping the toppling dominoes of communist countries.  We either supported Diem, or we let Vietnam fall to China; that was the thinking.  At no point does the documentary make this line of reasoning seem reasonable; it is only historical, and it is clearly, as all those jumps forward to the war reveal, leading to disaster.

I have to say, I'd always wondered how we were so stupid.  In 90 minutes, this documentary gave me some answers to that question.  Does the second episode erase that impression?  If it does, it can only be because the audience is being willfully obtuse, or needs its documentaries served with a large side of "My way or the highway."

As for the quality of the documentary itself, aside from whether it pushes your preferred narrative or not, I have to agree (so far) with the headline at Vox:  it is brilliant, infuriating, boring, and hypnotic.  Although I can only claim to have seen the brilliant and boring parts, with just hints of the hypnotic.  But, truth be told, I'm looking to relive my experiences of Vietnam as the "living room war."  That's the way I remember it, and I anticipate a frisson of recognition sometime in the next 16 and a half hours.