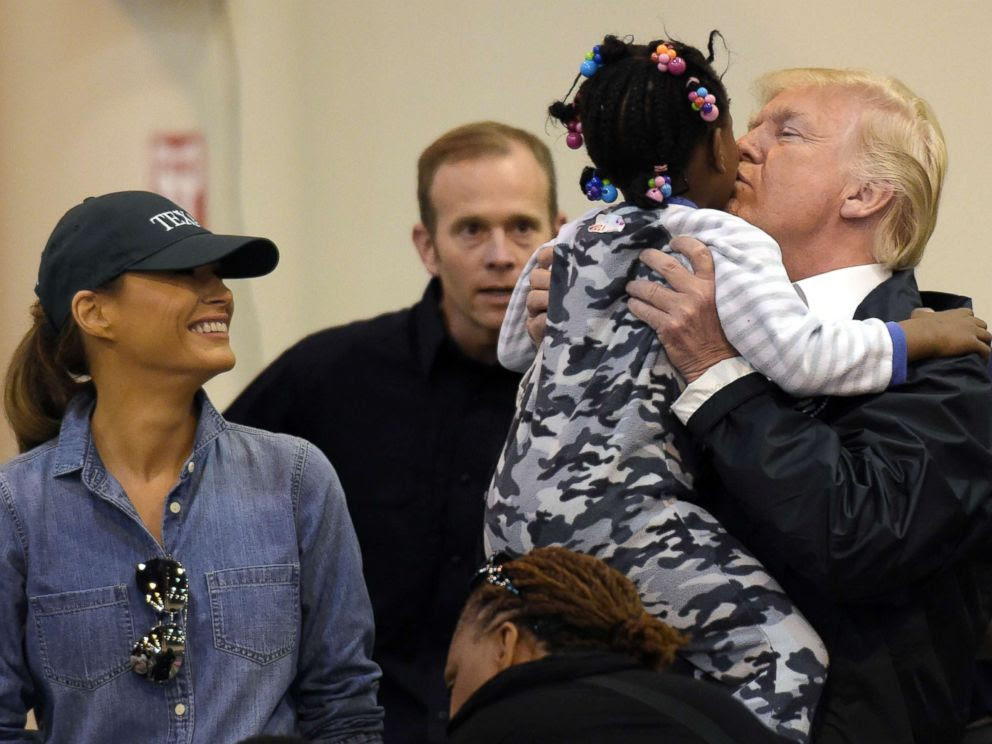 Isn't this what got Joel Osteen in trouble?  Not the refusal to open his large capacity building to people flooded out of their homes, but his happy-face tweets before he was shamed into doing it:

“The message is that things are working out well. Really, I think people appreciate what’s been done. It’s been done very efficiently, very well, and that’s what we want,” the president said. “We’re very happy with the way everything is going. A lot of love. There’s a lot of love.”


I'm only sorry we don't have a picture of Trump viewing the waters from high above in Air Force One.  And I don't mind the positive attitude so much as I mind the mindless attitude.  I'm glad he's happy with the way things are going; the rest of us aren't too please with what Harris County, apparently in Newspeak, calls "flood control."  Unless by that they mean the control how much flooding other people experience, and for how long.  That's being done "very efficiently and very well," too; from the point of view of the dams, anyway.

There are at least 44 people dead, and somewhere around 135,000 houses flooded out in Harris County alone (surrounding areas also suffered flooding and flood damage).  No mention of that in Trump's statements, not even a mention that he was handing out hot dogs to people who have no place to live and, in the case of apartment dwellers, probably have no place to go back to.  Nope, just "a lot of love."  He may be happy with the way things are going; the rest of us want it to be over.

Natural disasters like Hurricane Harvey are the worst kind of crises for people like Mr. Trump and Mr. Osteen, who purvey their own versions of the prosperity gospel. This is a belief that says if you think positively and make affirmations, God will reward you with financial success and good health. If you don’t, you may face unemployment, poverty or sickness. (Mr. Trump in particular always speaks in laudatory terms about himself and his companies.)

But the problem is that it’s hard to promote “Your Best Life Now” or “The Art of the Deal” to people whose houses have flooded or been blown away, or to evacuees who have only the clothes on their backs.

Mr. Trump’s and Mr. Osteen’s brands are rooted in success, not Scripture. Believers in prosperity like winners. Hurricanes and catastrophic floods do not provide the winning narratives crucial to keep adherents chained to prosperity gospel thinking. That is why it is easy for both men to issue platitudes devoid of empathy during natural disasters. They lack compassion for people who are not prosperous, because those people simply did not follow the rules.


I've seen this analysis more than once now; connecting Osteen's "prosperity gospel" to Trump, who gets it more from Norman Vincent Peale than from "New Thought" (although Peale and Osteen clearly share that same taproot).   It seems clear to me Trump is trying to talk this disaster away, but more for his sake than for ours.  He doesn't want to wear the mantle of Bush after Katrina.  He doesn't know what else to do, so he proclaims victory and wants to run away as soon as possible.  His efforts recall Poppy Bush:  "Message:  I care!"

But he doesn't care; except about himself.  Oh, well, we'll recover with or without him.