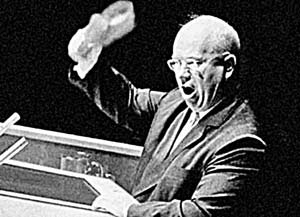 Trump at the U.N. (artist's rendition)

I missed the President's debut at the UN General Assembly, but I turned the radio on just in time to catch some talking head on NPR (Mara Liasson?  Sounded like her, but frankly, they all sound alike) saying Trump actually sounded normal, or "within the norms" of what we expect from Presidents.

“Rocket Man is on a suicide mission for himself and for his own nation,” Trump said of the North Korean leader during his address before the UN General Assembly. During the speech, Trump also said that the United States might soon have no option other than to “totally destroy” North Korea.

“I ask every country represented here today to be prepared to do more to address this very real crisis. We call for the full restoration of democracy and political freedoms in Venezuela,” Trump said, pausing briefly as the UN members applauded.

Trump again paused, expecting another applause. But he had to wait roughly four seconds before receiving a tepid response.

Trump declared that “the nation state remains the best vehicle for elevating the human condition,” and said the success of the global community depends on a coalition of such states that embrace their own sovereignty.

“In America, we do not seek to impose our way of life on anyone, but rather to let it shine as an example for everyone to watch,” he said.

But the President asserted that the United States would not be “taken advantage of” on the world stage.

“The United States will forever be a great friend to the world and especially to its allies,” he said. “But we can no longer be taken advantage of, or enter into a one-sided deal where the United States gets nothing in return.”

“As long as I hold this office, I will defend America’s interests above all else,” he continued. “But in fulfilling our obligations to our own nations, we also realize that each and everyone’s interest to seek the future where all nations can be sovereign, prosperous and secure.”


I mean, that nuclear deal with Iran!  We didn't even get naming rights!  Not like that building across the street from the UN that Trump has his name on (but no ownership interest in)!

If making jokes about governmental systems in other countries and giving mock nicknames to dangerously unstable foreign leaders and making a deal for the U.S. that somebody tells Trump is "good" (what does he know?  He thought he'd passed healthcare reform when the House voted) isn't moving back toward a "normal" Presidency, I ask you, good people:  what is?

(And Spencer Ackerman points out he liked Trump's speech better in the original Russian.)

But then it got worse!

“If the righteous many do not confront the wicked few, then evil will triumph,” Trump said.

“The United States and our allies are working together throughout the Middle East to crush the loser terrorists,” he said.

“That deal is an embarrassment to the United States and I don’t think you’ve heard the last of it, believe me,” he said.

“Major portions of the world are in conflict,” he told the assembled heads-of-state. “Some, in fact, are going to hell.”

I was teaching argument to my English class yesterday, and I pointed out that Aristotle's ethos is not just something granted by the audience (that the speaker is of good character and worthy of attention) but established by the speaker, too; and there are various ways of doing this.  "Believe me" is one such effort, I said.  It's a very weak one, but it's Trump's attempt to assert authority on a subject he really knows nothing about, and doesn't want to know anything about.