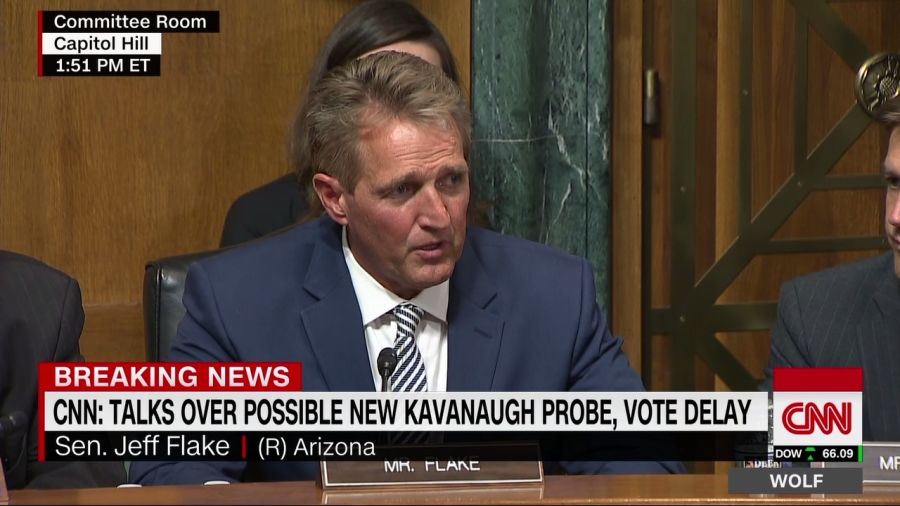 This post may be more ephemeral than most, as it may be completely pointless in as little as a few minutes; but CNN is reporting right now that Sen. Flake is announcing he will vote for Kavanaugh in committee if he can be assured the floor vote will be postponed for a week or more for further investigation by the FBI.  Indeed, as I type, they have voted 11-10 to send the nomination to the floor, apparently with a condition?  Per CNN, that's under discussion right now.

The reporting on this is still that a vote will be held on the Senate floor "early next week."  However, Ted Cruz cancelled a debate with Beto O'Rourke here in Houston in order to stay in D.C. over the weekend for "possible votes" on Kavanaugh.  The new term starts next week, and they want Kavanaugh on the bench by then if possible, so it's likely the Senate wants to confirm as late as Sunday, to ship Kavanaugh off to the bench Monday morning.  Will the Senate now wait a week because Flake has asked them to?    Signs point to "No":

There is no indication that Majority Leader Mitch McConnell (R-KY), who controls the floor, has agreed to this plan.


Will Flake prove strong enough to resist the pressure to vote for Kavanaugh within 48 hours, or to fight for what he says he's standing for?

Nah.  He's trying to grow a spine, but this time it does legitimately come too late.  On the other hand, does McConnell have the votes?

“I do think we can have a short pause and make sure the FBI can investigate,” Flake said, adding that he and other members are prepared to make a request to the White House to order an FBI investigation. “I’ve spoken to a few other members who — on my side of the aisle that may be supportive as well, but that’s my position. I think that we ought to do what we can to make sure that we do all due diligence with a nomination this important.”


Well, he does if those other members are as resolute as Flake.  Just don't be surprised if Kavanaugh is confirmed before October 1.

Will Flake be as resolute as Murkowski? That's the next question.


Statement from President @realDonaldTrump:
“I’ve ordered the FBI to conduct a supplemental investigation to update Judge Kavanaugh’s file. As the Senate has requested, this update must be limited in scope and completed in less than one week.”
— Sarah Sanders (@PressSec) September 28, 2018

Of course, if even more information comes out, especially if the FBI turns up anything.....