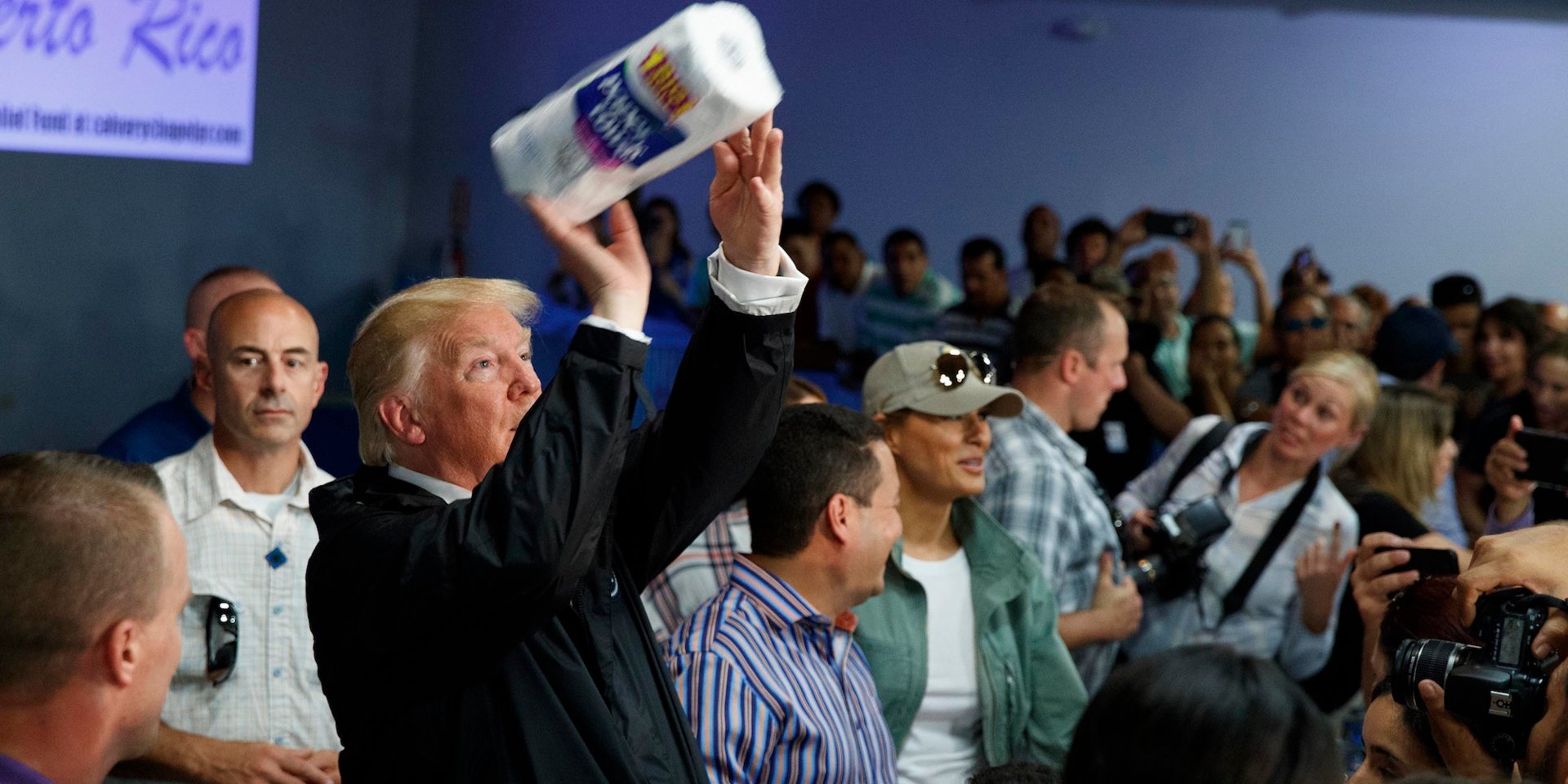 Trump has been fixated on the media reports on Puerto Rico's recovery from Hurricane Maria, especially the death count.  According to the report where I found this image, he was also upset by the video  of this event, because it made him look bad:

"They had these beautiful, soft towels. Very good towels," Trump said during an interview with former Arkansas Gov. Mike Huckabee in October. "And I came in and there was a crowd of a lot of people. And they were screaming and they were loving everything. I was having fun, they were having fun. They said, 'Throw 'em to me! Throw 'em to me Mr. President!'"

"The next day they said, 'Oh, it was so disrespectful to the people,'" he added. "It was just a made-up thing."


Because Trump never does anything wrong; he can only be wronged.

And then came Hurricane Florence, and Trump's Twitter feed suddenly overflowed with tweets directing people to FEMA and Homeland Security and NOAA and otherwise warning people to be ready for Florence.   He did break for this:


Right now, everybody is saying what a great job we are doing with Hurricane Florence – and they are 100% correct. But don’t be fooled, at some point in the near future the Democrats will start ranting...
— Donald J. Trump (@realDonaldTrump) September 18, 2018

...that FEMA, our Military, and our First Responders, who are all unbelievable, are a disaster and not doing a good job. This will be a total lie, but that’s what they do, and everybody knows it!
— Donald J. Trump (@realDonaldTrump) September 18, 2018


In a sea of tweets advising caution and promoting support services, these two were easily lost.  One might have thought the Trump of old had been finally leashed by his staff in an effort to make him appear reasonable.

And then he went outside.

“Got it?” Trump said as he handed two meals to a person in a car, adding: “Have a good time.”

The comment caused one MSNBC reporter to speak out off camera.

“I think he just said have a good time!” the reporter gasped.

Yeah, that's gonna be somebody else's fault, too.

No sooner posted than:


From the pool report, President Trump tells a man who had a boat wash up on his property: “At least you got a nice boat out of the deal.” #HurricaneFlorence pic.twitter.com/4m6f2gZnyp
— Lauren Horsch (@LaurenHorsch) September 19, 2018

More: "They don’t know whose boat that is,” Trump said. “What’s the law? Maybe it becomes theirs.” #HurricaneFlorence
— Lauren Horsch (@LaurenHorsch) September 19, 2018

Gonna be a lot of blame going around.