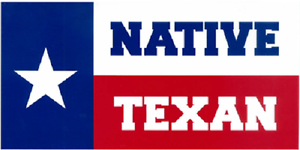 I suppose I ought to get one of these for my car someday....

I live just off a major north-south boulevard that runs perpendicular to Interstate 10, a freeway that cuts through Houston on the path once traversed by the old Kansas-Texas rail line (the lines were finally torn up a few years ago to widen the highway).  The story is that a Houston city planner once proposed turning the boulevard my residential street connects to, into a controlled access freeway.  The road is crowded with businesses and housing developments and even a high-school along its run north of the highway.  It's an idea that probably looked good on paper but one trip to the street would convince you it was utter nonsense born of sheer ignorance.

But I think of it when I read Matt Yglesias advising Austin on how to handle its growing pains.  First, "Keep Austin Weird" is a slogan that started after I moved away from that town 25 years ago.  It ostensibly meant "buy local" (I have a coffee mug from a local book store with the slogan on it; a lot of t-shirts with it are from local stores), but if it had a connotation of "keep Austin the same as it is," that wouldn't be denied either.

Funny thing:  that slogan took hold after I left, but since I've left Austin has changed so much I don't recognize most of it.  Even the house I owned there, the first home my daughter came home to, has been torn down and replaced.  I spent a night in a hotel, a local one that I thought would be "weird" (it was just disappointing) in a part of town that was thriving when I left, but now looked like a place you didn't want to be out in after dark.  And before that, back when I first moved to Austin, the slogan was "Native Texan."  It was on bumper stickers and coffee mugs (I still have mine), and it meant the owner was a native, not a transplant.  About the time that fad faded a local newspaper columnist published a letter of advice to a well-meaning person asking what to look for in Austin, which the writer was soon moving to.  Don't come, was the columnist's advice; we're full.  She was very popular for that; not that it stopped the development or the construction of apartments.  There was even an ordinance limiting the height of buildings downtown, trying to preserve "sight corridors" for the magnificent rose granite dome of the Texas Capitol in downtown Austin.  That didn't last long, either.  It's hard to see the Capitol now from several vantage points except coming straight up Congress Avenue.  The charming buildings of Austin, save for the Driskill and the Paramount Theater, are gone.  6th street, which was full of dive bars and tattoo parlors when I moved there in the late 70's, rose and fell in those almost 50 years; it's full of dive bars again.  It was once the center of Austin's entertainment sector, the most appealing street after dark in town. Now it looks like a war zone again.

Yglesias wants to build a rail line down 6th street, after one is built on Guadalupe, the street that runs north from the river past UT campus and up into north Austin.  It's a winding, crowded street with buildings all along it:  state buildings, the UT campus, churches, businesses.  Turning it over to light rail sounds rather like turning the street near me into a controlled access freeway.  But who would ride these rails?  People going to work?  From where?  To where?  And how do they get to the train stations?  Light rail is supposed to replace cars and reduce traffic and provide "mass-transit," but unless it stops at the end of your street, or in front of your house, you have to get to the station first.  And how many people using Guadalupe everyday are looking to park their car, get on a train, and ride to a store, a restaurant, a bar.  I know a coffee roaster several blocks off Guadalupe; I'd be loathe to get off a train blocks from that store and walk downhill and uphill to get my coffee, and then walk back with my packages, especially in August in Texas.  And what is down 6th street at the moment that anyone wants to take a train to?

When I lived in Chicago, I actually lived in Cook County, in a small town that bordered O'Hare Airport.  The family took the train into Chicago once.  It was easier to walk around Chicago than try to drive there, park, and get around, especially in the days before Google maps and smart phones.  Besides, Chicago had made sure there were no freeways out of the city into the county; they'd learned that lesson from St. Louis, and St. Louis County.  But in Austin?  I'm trying to imagine, if I lived there again, ever taking a rail that ran down Guadalupe or Sixth street, rather than just taking my car.

Yglesias is, like that apocryphal city planner declaring a boulevard would make a fine freeway by looking at a map, wholly out of his depth.  "Keep Austin Weird" may be the latest iteration of Austin's desire to be economically viable (when I moved there, the economy was moribund.  You worked for the city, the state, or a hospital, or you were a student working for tips at a bar.) and yet remain what it was when the last people got there.  That struggle is more than 50 years old, it didn't begin with Yglesias' notice.  And his solution doesn't take into account why people drive cars anyway:  they do it because Texas is hot, or wet, or cold (I was walking in downtown Austin decades gone when I crossed the line of an oncoming cold front.  It was like stepping into a freezer, the temperature dropped so dramatically between one step and another.), and because cars are so damned convenient. And because cars go where the people are, and where they want to go; trains don't, not in cities laid out like Austin.

I'm all for mass transit, but Houston built a light rail system downtown.  It's great for people who live near the Medical Center and work there; but most people use it by driving downtown, parking near a station, then riding to the football field because it's easier than parking in the lots there.  Needless to say, even with the multiple uses that stadium gets, it's not a daily exercise for most of us.  The people who live there like it; the majority of people who live in Houston never use it.  And years after it was put in, it's still conflicting with the traffic; train/car collisions are numerous, and hard to avoid, the way the thing was laid out.  If Yglesias' plan doesn't cause the problems Houston's rail does, he'll have to shut down Guadalupe and 6th Street to cars; and that's not going to happen.

Austin will still consider itself weird, even if it has changed so much in 25 years I wouldn't move back there if I could.  The Austin I knew is gone, even as the people there earnestly want to preserve the Austin they know.  Like anything loved, it's better preserved in memory than preserved in amber.  That's the problem that needs solving, and the solution is not mass-transit or new city ordinances.  But then, technology and law are seldom the solutions we think they are going to be.