See If This Adds Up

Are the investigative “journalists” of the New York Times going to investigate themselves - who is the anonymous letter writer?
— Donald J. Trump (@realDonaldTrump) September 6, 2018

Aren't you investigating that?  I thought the NYT was "failing" and "fake news!"

Because Trump loves to bluster, but when it comes to doing anything:

Trump often attacks the House minority leader in public but privately “treats her with a sometimes awkward solicitousness,” according to a new Time magazine profile of Pelosi.

Pelosi casually mentioned once in a White House meeting that participants should “pray for success” on immigration, according to an aide briefed on the meeting.

“Are you going to pray?” Trump asked, but Pelosi ignored him and kept talking.

However, the president kept interrupting and asking Pelosi to “do a prayer.”

Trump finally realized Pelosi was not going to agree to his request, so he instead turned to Vice President Mike Pence and asked him to pray.

“To date, the president has seemed like he has the potential to be dangerous,” [GOP Strategist Tim] Miller said, “but really he’s been mostly pathetic.”

To illustrate his point, the strategist brought up the case of Trump’s Twitter fury against Attorney General Jeff Sessions for recusing himself from the Russia investigation.

“We are right to be extremely vigilant,” the strategist said, “but, to date, I think what to expect in the next few weeks is a lot more sad tweeting.”


We hear the stories about staff convincing Trump not to do something, but was he really going to do it anyway?  He announced on Twitter that transgendered soldiers would now be persona non grata.  Whatever happened to that, anyway?  He repeatedly pours scorn on Mueller and Sessions and the entire DOJ; on Twitter.

What does he ever do about it?  And his response to the NYT Op-Ed?   Well, the White House said:

“Nearly 62 million people voted for President Donald J. Trump in 2016, earning him 306 Electoral College votes – versus 232 for his opponent,” the statement released by White House press secretary Sarah Huckabee Sanders reads. “None of them voted for a gutless, anonymous source to the failing New York Times.”


And Chuck Todd pointed out:

“I have a feeling I know who dictated this statement,” Todd joked, suggesting that it sounded like Trump himself wrote it.


And that's as vicious as that's going to get:  words, but never actions.  Consider the Press Secretary's statement about the "gutless loser," well, that's as tough as the White House investigation is going to get.  And then Trump will have to tell Kelly to fire whoever they hang it on; unless it's Kelly.  Then who does Trump send to do the job? 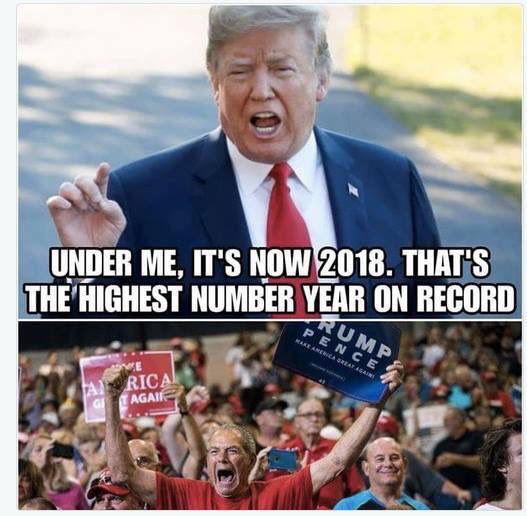