Away in a Feeding Trough 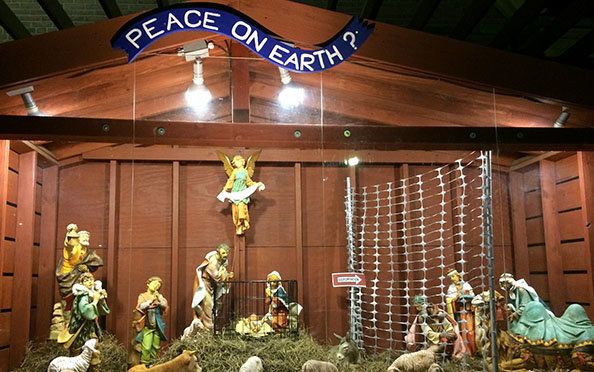 In writing a Christmas post about eleven years ago, I did a similar exercise of really thinking of what it said in the text to the people who those stories were originally told to would have made of the manger scene and the shepherds, having grown up on and lived on farms my entire life, my mind went to animal shit in a time and place when bedding for animals in a cave or hovel would have been minimal and labor to clean them out probably only slightly more plentiful.  To talk about the Son of God being born in a stable wouldn't have looked like the creches erected at almost any time since that custom started, it would have been filthy, smelly, fly ridden, noisy and probably a danger to the life of both mother and child.  And the people who first told that story and heard it would likely have known that.  "Silent Night" might have some truth in it but it isn't the truth.  No doubt mothers, especially young mothers who went through labor and gave birth in such circumstances might be touched with the feelings of that song but it wouldn't have been the only thing they thought and felt.  I can imagine it is something that lots of women who give birth to children under similar danger and hardship, today, might be those in the best position to tell us about what that must have been like.

I thought I'd written a post on this, or copied my sermon "Away in a Feeding Trough," but if I did, I can't find that post now.  The most I could find was this brief passage:

There is a "renegade" reading of the Lukan nativity story, one that comes from a scholar who lived much of his life in the Middle East. He insists that the standard reading of the story completely misunderstands the culture of the area. Such inhospitality would be unthinkable; and besides, if Mary and Joseph did come to Bethlehem, family there would put them up (if they were as poor as most of the people, the thought of an inn would never occur to them, if, indeed, such commercial establishments existed at the time. More than likely, they didn't. The economy was very sharply divided between the "haves" (less than 5% or so), and the "have nots." There probably weren't enough people between very rich and poor to keep "inns" in business.)  [Crossan is very good on this point:  the market economy we have today, and imagine has existed since trade began, has no parallel in Rome.  That economy was dominated by patronage; the more powerful your patron (starting at the top, with Caesar), the more powerful and rich you were.  At the bottom were peasants like Joseph, and shepherds and fishermen, who sold their labor, and found a very disinterested and fragile market for labor.  Recall the parables of Jesus about laborers hired for the day; that was more common for his parents than the "market" as we imagine it.  You have to shift your thinking dramatically in order to understand these stories correctly.]

So where do we get the idea? This scholar said the word translated as "inn" referred to the guest room, not a free-standing building. He also said the "manger" was the feeding trough, a feature of most homes of the time. [I have a note at my original post: "the word Luke uses, katalamati, could mean 'inn,' but 'is perhaps best understood here as lodging...or guest room....' Arnot and Gingrich, Greek-English Lexicon of the New Testament, 2nd edition, 1958, p. 414."  Again, translating to my own family's experience, if family came to town in my childhood for Thanksgiving or Christmas, we made room for them in our house, my brother and I usually giving up our beds to sleep on cots, or the floor, for the adults.  To make them get a hotel room was unthinkable.  I don't imagine hospitality was any different in first-century Palestine.]

Imagine that you are poor, but own a few animals. What you don't own, is land, because land is power, and wealth. But you own animals. Where do you put them at night, if they are so valuable? In the one building you control, of course. Homes had a raised area, a platform just high enough for a feeding trough. The family slept on the platform, which also, because of the height, kept the animals out. The children of such poor families were regularly placed in the trough as a makeshift crib. So what Luke is telling us is not a story of inhospitality, but of peasant hospitality; of a ruler living as the poor lived, fully and completely.

"But at the coming of the king of heaven, all's set at six and seven." Well, it is for us, because we are the rulers, not the peasants. The hospitality that is common among the poor, and practiced widely in the Middle East (the Bible is full of exemplary stories of hospitality, as valued by that culture), is not common among us. There are inns for travelers, other places for them to stay; and if they can't afford it, what business is that of mine? Who are they to me? [That, at least, is how we imagine the people of Bethlehem at the time of Jesus's birth; but why?  Because we imagine we are so much superior in manners and welcome?]

This is part of a more complete reading of the Lukan nativity narrative.  I bring it up now so we can have it in mind a bit later, because Luke's nativity story is much longer and more complicated than Matthew's; and serves a very, very different purpose, as we will see.