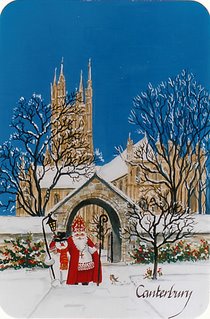 
O you who love festivals,
Come gather and sing the praises
of the fair beauty of bishops,
The glory of the fathers,
The fountain of wonders and great protector
of the faithful.

Let us all say: Rejoice, 0 guardian of the people of Myra,
Their head and honored counsellor,
The pillar of the church which cannot be shaken.
Rejoice, 0 light full of brightness
That makes the ends of the world shine with wonders.

Rejoice, 0 divine delight of the afflicted,
The fervent advocate of those who suffer from injustice.
And now, 0 all-blessed Nicholas,
Never cease praying to Christ our God
For those who honor the festival of your memory
With faith and with love.--Orthodox Liturgy

"The large rooms of which you are so proud are in fact your shame. They are big enough to hold crowds--and also big enough to shut out the voices of the poor....There is your sister or brother, naked, crying! And you stand confused over the choice of an attractive floor covering."--Ambrose, 4th Century

This voyce both sharp and also shryll
Shal be herd from heven to hell; All mydle erthe it shall fulfyll:
"Venite ad iudicium."

"For by me ye set no store,
Ye shall abye ryght dere therfore
In hell with devyls for evermore;
Venite ad iudicium."

Marana tha. Come, Lord Jesus. But not before Christmas. We have a lot of shopping still to do. 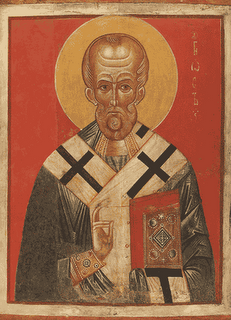