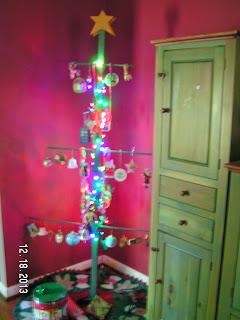 Christmas Eve is the feast day of our first parents, Adam and Eve.  They are commemorated as saints in the calendars of the Eastern churches (Greeks, Syrians, Copts).  Under the influence of this Oriental practice, their veneration also spread to the West and because very popular towards the end of the first millennium of the Christian Era.  The Latin church has never officially introduced their feast, though it did not prohibit their popular veneration.  In many old churches of Europe their statutes may still be seen among the images of the saints.  Boys and girls who bore the names of Adam and Eve (quite popular in past centuries) celebrated their "Name Day" with great rejoicing.  In Germany the custom began in the sixteenth century of putting up a "paradise tree" in the homes to honor the first parents.  This was a fir tree laden with apples, and from it developed the modern Christmas tree.

I had that quote ready to post, and checked it.  Now I'm posting it in connection with this post, which I won't even quote from; it needs to be read in its entirety.  I've posted about the paradeisbaum before. Time to go beyond that, and the post at Thought Criminal takes us there.

I was going to post this, too, sometime today; but it being nearly Christmas, I'll stuff the goose (so to speak) and add it.  This morning I found a post about Christmas movies and their relationship to social justice.  And then this, about the radical nature of the birth of the Christchild.  The latter concept I've mentioned before, even this year.  But nothing in either of these articles touches on the truly radical nature of the Magnificat, not to mention the fact the announcement of the birth comes, in Luke's version, to shepherds, not to the rich and powerful.  There's political reasoning there, too, if you look at what Herod does with that information in Matthew's version.

Lastly, there was an article at The Daily Beast about how American churches are failing largely because they are too concerned with social justice (or consumed with pedophile priest scandals), an article that aims as objectivity in the beginning (only Africa is showing increased interest in Christianity, because of fundamentalism), but drops that veneer of respectability in favor of good old American evangelicalism and fundamentalism (which young people are abandoning, too, though the article won't bother to mention that).  It's of a piece with another article by the same author about what ails Texas (turns out it's liberals moving to the Lone Star State; millennial liberals, the worst kind!).  I may yet write about that (I know you're excited!.  Or not.).  The guy writing these articles is a particular kind of Texas goober, so it could be fun.

Or I could be charitable; it's Xmas, after all.