Yes, it is too soon 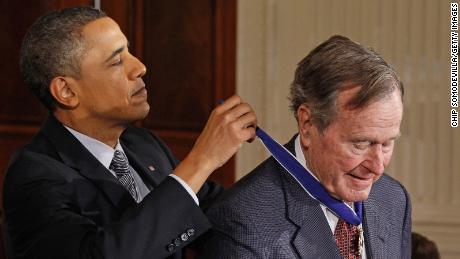 
Eight women say George HW Bush groped them. Their claims deserve to be remembered as we assess his legacy.

My strongest memory of George H.W. Bush (aside from Dana Carvey's impersonation) is his pardon of the Iran-Contra figures on his way out the door, a pardon eclipsing even Ford's pardon of Nixon because Bush was saving his own ass, and everybody knew it.  However, and it's a weak defense, I only mention it today because of the graceless articles on Vox today. (And these are merely representative, I'm sure there are more out there.)*

I'm sure the demand to be topical and au courant mean those articles must be published now or never. If that's the case, I vote for "never." It isn't, though. There will be time for the full picture of the man. I would like to see that pardon talked out thoroughly, especially as it calls into question the wisdom of the pardon power, which seems to have done more harm than good in this century (at least in the hands of Republican Presidents). That would be a worthwhile discussion, and even another creditable contribution to our national life by the late Mr. Bush. But that discussion is not for today; today is for mourning and respect for the dead and the family of the dead.

Common decency and humanity demands no less. Time enough for criticism and honest assessment. For now the wisdom of the admonition is not to be dismissed: do not speak ill of the dead.

If nothing else, one day your family will be grateful to be shown as much respect.

*There are: Slate wants in on the act, too:

Considering the subject is obituaries, even though they "probe" his personal life by mentioning it (he was married, he loved his wife, he made parachute jumps), it is improper, apparently, to fail to mention the sexual assault and harassment allegations against him in what amounts to a eulogy.  There is a time and place for such information, and an obituary is not it.  I doubt they mention his pardons, either (I haven't seen anyone bring them up), even though, from a Constitutional (not to mention current events) point of view, I think those are far more relevant, and far less subject to challenge as to whether or not they happened.  Still, I would not fault an obituary that didn't mention them.  There is a time and place, and speaking ill of the dead is as uncivil as Donald Trump refusing the opportunity to retract his assaults on the deceased.  "The dead" here meaning the recently dead; when they become truly historical figures, their honest assessments can be made.