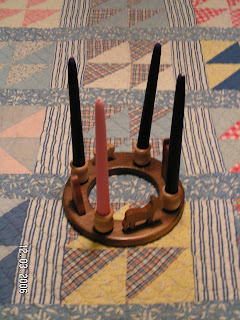 Where is that Law for which we broke our own? "How could the Eternal do a temporal act,/ the Infinite become a finite fact?" I would put that against Richard Rorty and the legion of on-line atheists who seem to firmly believe that through science and technology, as I originally put it, "that the Eternal [which is science, having replaced "God"] can do a temporal act, and we, through our military power and hubris, can rearrange nations [and cultures] and usher in a "new world order," a secular "kingdom of heaven," if you like. Seems to me we have all agreed that "the Infinite [can] become a finite fact," and we avidly sent our youngest and poorest off to die in order to realize that dream.

And now we pay the price for it.

I spurn with loathing your pilgrim feasts;
I take no pleasure in your sacred ceremonies;
When you bring me your grain-offerings I shall not accept them,
nor pay heed to your shared-offerings of stall-fed beasts.
Spare me the sound of your songs;
I shall not listen to the strumming of your lutes.
Instead let justice flow on like a river and righteousness like a never-failing torrent.