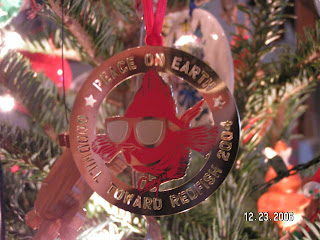 Christ climbed down
from His bare Tree
this year
and ran away to where
no Bing Crosby carollers
groaned of a tight Christmas
and where no Radio City angels
iceskated wingless
thru a winter wonderland
into a jinglebell heaven
daily at 8:30
with Midnight Mass matinees

[The commentary is from a few years back, but I've decided to keep it intact.]

I was just teaching this poem, one that has been around long enough almost to become a cliche, as familiar a feature of some Christmas observances as Scrooge and Charlie Brown, and reading it aloud I realized what a wonderful meditation on the mystery of the Incarnation and Advent it is.

I'm still puzzling out why we rush through Advent and make haste to get to Christmas, only to throw the whole thing in the garbage on December 26th and hurry our way through to a drunken stupor on January 1st morning, but I have some ideas about it. Fehrlengetti's poem is clearly about that, about all the preparation and the things that, in Linus Van Pelt's wonderfully ironic phrase, "really brings Christmas close to a person." But only when you read it aloud do you capture the chorus-like repetition of the first four lines, and realize how each repeat of those lines sets you up to expect another layer of the modern observance of the last month of the year. The first lines drop like a stone into our understanding of the Nativity and the Crucifixion, of Christmas and Easter, and the rest of the poem describes those ripples that stone makes in our consciousness.

It starts with the Christmas trees, then spreads outward from there to the people: first the "cornball relatives," then the Bible salesman (as if the word of God needs marketing!), then the advertising Magi, and from those religious circles out into the secular world of Santa and Bing Crosby and Radio City Music Hall (bringing their Xmas show to Houston this January! Some things never change, even after 50 years.)

But just when you expect the whole thing will end with a "J'accuse!," with another Christ-cleansing-the-temple moment, with Jesus climbing down to declare "You suck!" and running away to avoid the glitter and twinkly lights, it does something else entirely, and instead returns us to the mystery of the Incarnation. The poem isn't about criticizing modern society after all. There are really only a few ironic lines, and they aren't really so ironic as they are honestly descriptive. The poem is about the eternal mystery at the heart of the religious holiday which still beats at the center of all this busy-ness and concern. It is an observance of peace in the midst of clamor, of wonder in the midst of the quotidian.

It's good to remember it is still, at least on the liturgical calendar, Christmas.