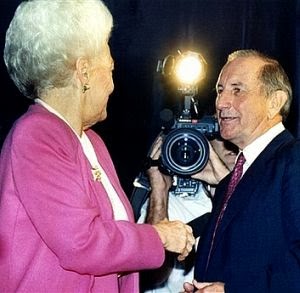 Telling her "I'm here today to call you a liar," didn't help much, either.

A few more reasons not to worry about Wendy Davis:

A few decades back, now (maybe not that far, but I'm terrible with dates; don't even know how old I was when this happened) the then head of the Southern Baptist Convention opined that women should be submissive to their husbands, especially Southern Baptist women.

Texans are staunchly Southern Baptist (not necessarily all of 'em, but sometimes it seems like it), but the women of Texas quickly let the head of the SBC know his opinion on this matter was not welcome in Texas.  Texas women may not like "feminism," but they do not submit meekly to their husbands, even when the Church says they should.

When Ann Richards won the governor's race, she did it largely on the strength of a non-handshake:  Clayton Williams, her opponent, refused to shake her hand at a debate, live on TV cameras.  That was all he needed to do to prove himself unfit for public office:  to try to publicly shame a woman.

Abbott's campaign accused Davis of “systematically, intentionally and repeatedly deceiv[ing] Texans for years about her background."

"I came from a place of struggle, and we can parse dates all day long," Davis said. "Unless you've sat in your home with the lights turned off, it's hard to appreciate how demoralizing that can be. And the fact that Greg Abbott is trying to belittle my journey as somehow being insignificant and overblown demonstrates that that's not a challenge that he appreciates or understands."


But she didn't make a response alone:

"Greg Abbott has absolutely nothing to say to the millions of Texans who have struggled like Wendy did and identify with her powerful story, so he's resorting to these deeply offensive attacks -- guaranteed to alienate women (and men!) whose votes he was counting on," said Jess McIntosh, communications director for EMILY's List. "He's actually going to say that Wendy and her daughter didn't live in a mobile home for long enough to tell that story. Which is, honestly, the most out-of-touch thing I've heard Republicans say this year -- and that is a high bar. Abbott's coming across like the rest of his party -- a bully with nothing to offer but offensive political attacks."


And, as James Moore points out:

The Republican candidate for Texas governor, Greg Abbott, has decided to attack Wendy's story. Well, really, just the details of the story. "How long did you live in that mobile home, mam?" Which is utterly stupid. Utterly. Every woman he wants to vote for him has likely struggled with the questions of family and career. Yes, even down yonder in Texas. And every one of them will be offended by him suggesting there is no validity to Wendy's story. Because a lot of them have been to that rodeo. The question they will ask of themselves is along the lines of, "Well, if a Harvard Law grad who became a state senator after being a teenaged mom doesn't measure up, what the hell might Abbott's people think of me and my accomplishments?"


Greg Abbott really doesn't want to go there.  He won't lose every woman in Texas; but he'll inspire a lot more of them to vote against him, than he inspires to not vote for Wendy Davis; even if he shakes her hand in public.  Besides:

“They wouldn’t be talking about Wendy if she weren’t a threat," she added.