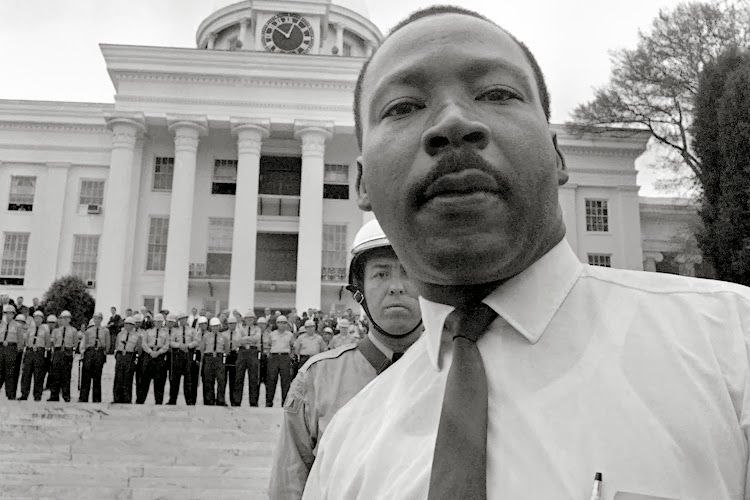 Start with the speech Thought Criminal has; then come back here.  Or listen as you read.

In an address to the Southern Christian Leadership Conference on 16 August 1967:

What I'm saying to you this morning is communism forgets that life is individual. (Yes) Capitalism forgets that life is social. (Yes, Go ahead) And the kingdom of brotherhood is found neither in the thesis of communism nor the antithesis of capitalism, but in a higher synthesis. (Speak) [applause] It is found in a higher synthesis (Come on) that combines the truths of both. (Yes) Now, when I say questioning the whole society, it means ultimately coming to see that the problem of racism, the problem of economic exploitation, and the problem of war are all tied together. (All right) These are the triple evils that are interrelated.

In other words, "Your whole structure (Yes) must be changed." [applause] A nation that will keep people in slavery for 244 years will "thingify" them and make them things. (Speak) And therefore, they will exploit them and poor people generally economically. (Yes) And a nation that will exploit economically will have to have foreign investments and everything else, and it will have to use its military might to protect them. All of these problems are tied together. (Yes) [applause]


There is much in that speech; and this is hardly the heart of it.  But simply to admit you've read Marx, and to further critique Marx by reference to Hegel, to Feuerbach, to "dialectical materialism," as if your audience understands what you mean, is as radical an act as putting your body on the line for what you believe. Dr. King went to jail for what he believed;  he was killed because of what he believed.  But I honestly think he was no more radical on the streets of Birmingham or in the pulpit of Riverside Church than he was in discussing, like an educated man, the philosophy of Karl Marx and Hegel and Feuerbach.  I can't help compare it to the public utterances and writings of Christopher Hitchens and Richard Dawkins.  They supposedly bravely stand up to the world and defy the opprobrium of society by declaring their atheism.  But where in the writings of Dawkins of the debates of Hitchens do you find any signs of education such as this?  Where do you find such evidence of learning and knowledge and discernment, as this, made almost in passing, by Dr. King?

Dr. King doesn't even use it defensively; he doesn't use his knowledge as a cudgel to bully his enemies.  He shows them that he stands ahead of them, looking back and smiling.  It is still true today; it is true again, to even acknowledge you have read Marx, is to be all but convicted as a Marxist.  Ignorance is bliss, knowledge corruption, and to know what Marx actually wrote, rather than what we all know he wrote, is to invite sympathy for the devil into your heart.  If you want to convince yourself King was a communist because he wasn't satisfied with the status quo in the 1950's (when he started), you would be confirmed in your opinion when he admitted he'd read Marx.  And his critique of Marx means even less to us now, we who have tossed away even Hegel's idealism and spiritualism.

And then he uses Marx and Hegel to critique war, and economic exploitation, and racism.

Of course, he also uses Scripture.  The story of Nicodemus, so often used to evangelize individuals, is used by Dr. King to challenge national society:

What I'm saying today is that we must go from this convention and say, "America, you must be born again!" [applause] (Oh yes)

And so, I conclude by saying today that we have a task, and let us go out with a divine dissatisfaction. (Yes)

Let us be dissatisfied until America will no longer have a high blood pressure of creeds and an anemia of deeds. (All right)

Let us be dissatisfied (Yes) until the tragic walls that separate the outer city of wealth and comfort from the inner city of poverty and despair shall be crushed by the battering rams of the forces of justice. (Yes sir)

Let us be dissatisfied (Yes) until those who live on the outskirts of hope are brought into the metropolis of daily security.

Let us be dissatisfied (Yes) until slums are cast into the junk heaps of history (Yes), and every family will live in a decent, sanitary home.

Let us be dissatisfied (Yes) until the dark yesterdays of segregated schools will be transformed into bright tomorrows of quality integrated education.

Let us be dissatisfied until integration is not seen as a problem but as an opportunity to participate in the beauty of diversity.

Let us be dissatisfied (Well) until every state capitol (Yes) will be housed by a governor who will do justly, who will love mercy, and who will walk humbly with his God.

Let us be dissatisfied [applause] until from every city hall, justice will roll down like waters, and righteousness like a mighty stream. (Yes)

Let us be dissatisfied (Yes) until that day when the lion and the lamb shall lie down together (Yes), and every man will sit under his own vine and fig tree, and none shall be afraid.

Let us be dissatisfied (Yes), and men will recognize that out of one blood (Yes) God made all men to dwell upon the face of the earth. (Speak sir)

I include that last bit because of Sarah Palin; and because of the argument of "colorblindness" which distorts and destroys Dr. King's true legacy.   But we really shouldn't ignore this, either:

And I say to you, I have also decided to stick with love, for I know that love is ultimately the only answer to mankind's problems. (Yes) And I'm going to talk about it everywhere I go. I know it isn't popular to talk about it in some circles today. (No) And I'm not talking about emotional bosh when I talk about love; I'm talking about a strong, demanding love. (Yes) For I have seen too much hate. (Yes) I've seen too much hate on the faces of sheriffs in the South. (Yeah) I've seen hate on the faces of too many Klansmen and too many White Citizens Councilors in the South to want to hate, myself, because every time I see it, I know that it does something to their faces and their personalities, and I say to myself that hate is too great a burden to bear. (Yes, That’s right) I have decided to love. [applause] If you are seeking the highest good, I think you can find it through love. And the beautiful thing is that we aren't moving wrong when we do it, because John was right, God is love. (Yes) He who hates does not know God, but he who loves has the key that unlocks the door to the meaning of ultimate reality.

I will only point out that Dr. King is directly referencing Paul Tillich in that last phrase.

How very much we lost when we lost Dr. King.