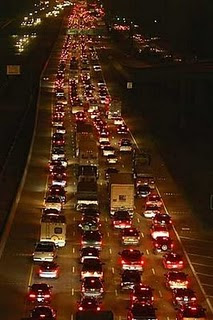 Last Friday Houston got ice on the roads, and news reports were of over 100 accidents on Houston roadways in a very short space of time.  Schools were closed, so it wasn't crowds of Moms taking Junior to school, nor hordes of school buses sliding sideways on black ice.

So yesterday, threatened with even colder temperatures and more precipitation, the city and county and every school district down to Galveston (on a barrier island in the Gulf of Mexico) shut down:  and nothing happened.  There was no ice of any significant accumulation anywhere in the area, and today lots of Monday-morning quarterbacking about how we all should not have over-reacted.

And I still remember the year San Antonio got 14 inches of snow; snow that was supposed to fall in Austin, well north of San Antonio.  You never, in other words, really know.  Or the time there was an ice storm bearing down on Austin and all of downtown hit the streets at once, causing gridlock that turned a 10 minute commute into three hours.  But all the cars on the road heated up the roadways (it happens down here, because it never gets that cold that long) and I got home easily and safely at the regular time (I sat above the fray and watched the traffic jam from 13 floors up, and decided I wasn't in that big a hurry to leave; wisely, as it turned out.  I wasn't sure for awhile that I wouldn't regret my decision.)

It happens, in other words, with provocation so slight most Northeners (nee "Yankees") wouldn't even think autumn was over yet.

And so to Atlanta:

One to four inches of snow and one-fourth to one-half inch of ice is a lot for a city with only 40 snow plows and 30 sand trucks, but Georgia Gov. Nathan Deal (R) and Atlanta Mayor Kasim Reed (D) are taking flak for the disastrous gridlock that left children stuck at school, commuters stranded on the interstate overnight and caused over a thousand accidents.

I don't know about the road geography of Atlanta, but I suspect it isn't too different from Houston.  Based on anecdotal experience, I'd say Houston has miles of elevated freeways.  Some of the highest points in the county are within visual range of where I sit:  freeway overpass exchanges that rise to the height of ten story buildings and are daunting in the rain, which we get plenty of.  Drop the temperature to below freezing and add a bit of moisture, and you have bobsled runs.  And it's not just the on and off-ramps, or the spaghetti bowls; some freeways cross others to the level of three sets of exchanges, and the elevated portions can run for a mile or two in any given stretch.  Lots of chances for freezing pavement, in other words, and lots of drivers who really can't be trusted on wet pavement, let alone icy conditions.

Like I say, a huge number of accidents last week, and almost everybody was already closed in anticipation of that ice.

30 sand trucks is clearly nothing; but in the south, how often does it snow enough to bother sanding?  By the time your through, the ice and snow are probably gonna be gone.  I saw parking lots being sanded by private crews yesterday; the landowners had learned from last Friday.  We don't anticipate this stuff, you see.  We have to wait to see if it's really gonna happen (it did Friday; it didn't yesterday) and decide how to respond:  close schools, close government, close ramps, close road, send out the trucks, inadequate in number in the best of times.  There was ice on ramps and lanes Tuesday morning at 3 a.m., the local government says; it was gone by rush hour time that day.

But what if it hadn't been?  It's not like the sun came out at 4 and dried everything away.

So I'll accept that the Governor and the Mayor are guilty of bad optics and poorer responses.   I'll even accept that governments can overreact (the parking lot from here to Dallas back in September of 2005, a distance of some 400 miles, was caused by blind panic after Katrina took out New Orleans and local officials wanted to avoid the same fate for Houston with Ritam freaked out and told everyone in the storm's path to run.  The whole metropolis took them at their word.  Which turned out to be worse than staying put, because Rita went to Beaumont and western Louisiana, leaving us alone.).  But to all you people who can't understand why Atlanta is still closed, or think that some one person is surely to blame, consider that last sentence in the quote above:  "over a thousand accidents."

And consider that any city that has only 30 sand trucks, doesn't really see the need to be prepared to spread much sand around, since ice is rarely a problem in any winter, and rarely a problem for more than 24 hours.

But next time you want to experience heat hot enough to soften asphalt and make your steering wheel untouchable, let me know.  That kind of weather we get real regular down here.