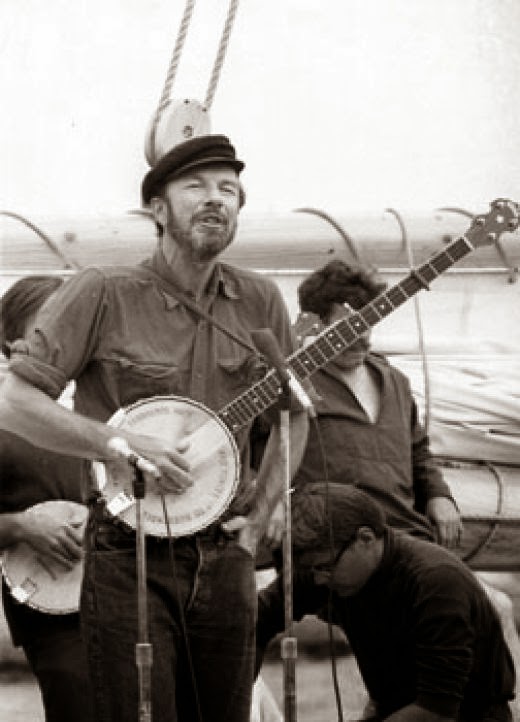 I pulled out my "The Best of the Weavers" double album yesterday, because for some reason (I am a "folk music" nut; I have almost every album Judy Collins ever recorded, especially her earliest albums; I have several by the Kingston Trio; I have Joan Baez's double album of love songs, including musical versions of Byron's lyrics, Irish "traditional" songs, even her 'Noel' album, both the original LP and the reissued CD with extra tracks.  I'm a nut for Xmas music, too, but I won't go into that) for some reason, as I was saying, I don't have any Pete Seeger albums.

I mean, I even have paperback collections of "folk music" chorded for guitar and banjo (yes, the banjo still rests not far from where I sit; no, I don't know how to play it any better than I did when I got it).  I seem to remember having some printed stuff with Seeger's name on it (probably long gone, now; that's yet another story), but no Pete Seeger recordings, except for this double set I got at a garage sale, if I recall correctly.

And that's what prompts me to put Pete Seeger in context just a bit better; well, that and what Josh Marshall had to say (which is more revisionist than I would be, but then he's almost 15 years younger than me; sometimes these things still make a difference after high school).  The "folk revival" of the '50's and '60's was no small thing, although it was hardly Yeats saving Irish traditional culture or the Chieftans reviving a respect long overdue for Irish "traditional" music (the "traditional" always being problematic in these cases, as the purity of the music ain't all that pure and ancient; but, again, I digress).  Yes there was the break when Dylan went electric (I have that event, recorded, on the soundtrack of that documentary Scorsese made; I have too many odd recordings...).  That never meant much to me, since I was too young to know it happened in '65 (alive, but unaware).  Still, it was the folk movement that fed an interest in music that wasn't Big Band or orchestral (don't get me started on my love for "classical" music), and it went way beyond Dylan and Puff, the Magic Dragon (which is, or isn't, about drugs, depending on who you ask).  And where would early Neal Young and James Taylor have been without it?  Or CSNY of Joni Mitchell, for that matter?  Are they even imaginable outside that context?

Turns out there are other influences here as well.  This Best of the Weavers album includes:

"Goodnight, Irene," by Leadbelly.  No surprise; it was their biggest hit.

"Wimoweh," which became a hit in a very different version (with lyrics about the lion and the jungle) a few years later (it was played every year in my hometown when the two big (and for the longest time, white) high schools played each other in football, because the other team was the "Lions"), and was reprised in more or less its original Weavers form by Nanci Griffith.  Although no version quite captures the weird, Robert Shaw Chorale vibe of the Weavers version.  It almost sounds like something that belongs on my "Christmas Cocktails" Ultra-Lounge CD (I warned you).  Horns, weird "lounge" rhythms, the whole nine yards.  Curiouser and curiouser.

"(The Wreck of the) John B," which I always thought was a Beach Boys tune.

"Midnight Special," which I only associated with blues and rhythm and blues artists, and by extension rock 'n' roll bands.

"Rock Island Line," another Leadbelly tune.  Although the Weavers released their recording of this in 1950, it became a hit for Lonnie Donegan in 1956 (the album I have was released in 1957); I can't say for sure, but I suspect he heard it from the Weaver's version.

And several which were covered (as the industry still likes to say it) by other "folk" bands, like the Kingston Trio ("Kisses Sweeter than Wine"); but you can see there how these songs first entered the musical bloodstream, the one based on recordings, not just on what people played in their front rooms (something you don't see anymore outside that great scene in "Winter's Bone").

I find that kinda fascinating.  Seeger was responsible for a bit more than we might realize, in other words; and we are all the richer for him, in so many, many ways.

It wouldn't hurt us at all to strive for that to be said of each of us, one day; however we could manage it.